Posted on 3 October 2011 by Defending History

The following is the approved text of the speech by Faina Kukliansky at the September 23rd commemoration ceremony at Ponár (Paneriai), the mass murder site near Vilnius where some 70,000 Jews from the city and its surrounding areas, and around 30,000 non-Jews, were murdered by the Nazis and their local partners. A prominent attorney and constitutional specialist, Kukliansky is chairperson of the Vilnius Jewish Community and deputy chairperson of the Jewish Community of Lithuania. The text was translated from the Lithuanian by Geoff Vasil and approved by the author.

In 1994 September 23rd was declared the day of commemoration for Lithuanian Jewish genocide victims, dedicated to honoring the victims. The Vilna Ghetto was liquidated on 23 September 1943 when the last surviving Jewish residents of the Lithuanian capital were murdered or sent to concentration camps abroad. 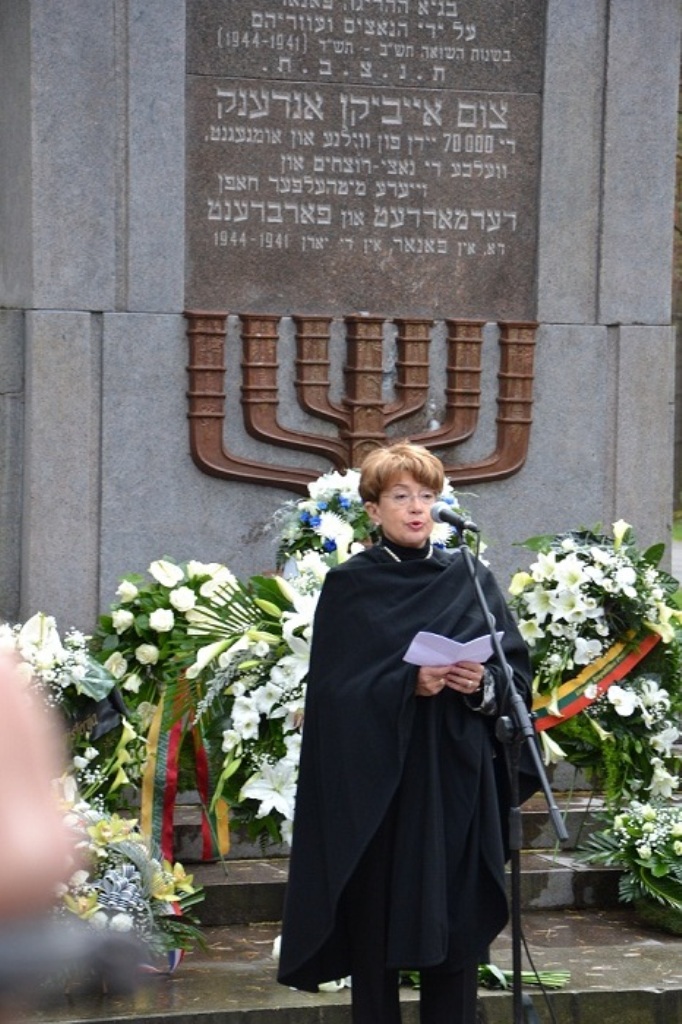 We gather here every year to honor those murdered. We come to this monument, for whose construction, after  the restoration of Lithuanian independence, émigré Shaya Epshtein donated funds, and upon which it is written in Lithuanian, English, Hebrew and Yiddish that 70,000 Jews were murdered here.

After the war, Vilna Ghetto prisoners who returned from the forests and concentration camps used their own very modest funds to erect a monument to the memory of their murdered loved ones, but this monument didn’t please the Stalinist regime and it was blown up. After some time a new, Soviet monument was erected with the Soviet rather than the Jewish  star.  The 70,000 murdered Jews of Lithuania were renamed Soviet citizens.

At the beginning of the summer we, with the Center for the Study of the Genocide and Resistance of Residents of Lithuania, and the Vilnius municipality reinterred the remains of sixty-four exhumed bodies, the first victims of Ponár. They were shot nearby, on Titnago Street. They were Vilnius residents and almost all of them were Jews. The organized mass shooting of Jews here began with them.

The ceremony was special and symbolic. The victims of war were buried physically, not nameless bodies, because we know their names. There were Catholics among those murdered. There was enough room for everyone in the graves at the site, for Jews and non-Jews. We buried them according to Judaic and Catholic rites. Rabbis and priests performed the burial, and more than a hundred Israeli soldiers attended the ceremony.

We live in the twenty-first century. We cannot and will never forget what was. Not the murdered, not the massacres, not the murderers and not the rescuers. We will tell the truth to our children and grandchildren, allowing no one to deny the Holocaust, to reinterpret and comment upon historical events in an absurd way, or to condemn the anti-fascist resistance.

At this point I would like to quote Norwegian prime minister Jens Stoltenberg’s words, spoken after the neo-Nazi Breivik’s attack on Utoya: “The terror will be met with more democracy and more openness.”

Let my words come true, that the murdered can rest in peace because this will never again happen here.