We Travelled from Dublin to Honor our Ancestors in Plungė (Plungyán), Lithuania

Posted on 18 August 2020 by Defending History

We come from Dublin, Ireland and were born into the Christian community. Our great-grandmother gave birth to our grandmother in Manchester in 1895. Our grandmother was born out of wedlock and we never knew who the father was despite searching the records but always assumed he was British. When we submitted our DNA for analysis on a well-known website we were surprised and delighted to learn we were related closely to Eastern European Jews through our mother’s lineage and through the DNA links we discovered we are related genetically to families who were centred in the Plungė (Yiddish: Plungyán) region. For confidentiality and sensitivity reasons I will not mention their names as they probably don’t know of this branch of the family.

Our journey to the Kausenai massacre site near Plungė was a pilgrimage to honour our murdered Jewish ancestors and to pray for peace and forgiveness for all people who have been subjected to hatred and racism.

My two sisters and I visited the Kausenai site on August 6,  2020 to lay flowers and perform a healing ceremony. We looked forward to this visit for many years.

When we arrived at the Kausenai site we had mixed feelings of excitement and profound sadness. Our thoughts and prayers were with the innocent men , women and children who were brutally murdered and thrown into these burial pits. Last year we had visited the graves of our ancestors in France who lost their lives in World War I. The graves were perfectly kept and maintained after more than a hundred years. 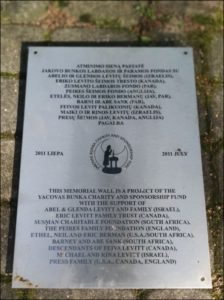 We were shocked and disappointed to see the condition of the area around the memorial wall and mass murder site of the Jews of Plungyan in Kausenai. There were weeds growing everywhere. Glass lanterns were vandalised and glass fragments were strewn all around. I found a metal sign from the memorial wall thrown into the bushes behind the wall which was an obvious act of vandalism. Our hearts sank because we had hoped that Lithuania and the Lithuanian people would have moved forward in relation to peace and forgiveness.

I hope the local people who continue to perpetrate these racist crimes against the Kausenai massacre site are in the minority but we and the Lithuanian community need to speak out loudly against them and transparently shout from the heavens that this is not acceptable and will not be tolerated in a multi-cultural European society in 2020.  It is nearly eighty years since the atrocities were committed yet elements of the hatred persist in a small minority of our society today.

It appears that the local municipality do not take proper care of this site and I have written an email to the mayor and am awaiting his response (but have not received anything  yet).

People who perpetrate hate crimes should be brought to justice and receive the full rigour of the law. The minute we appease a bully is the minute we will lose our freedom and dignity. Bullies need to be confronted as they are usually cowards who hide behind slogans and logos and have allowed themselves to be subsumed into a group or gang to hide their own inadequacies. These people need education, redirection and forgiveness so that they can correct their evil ways and thoughts and actions.