Following a week of major international coverage of the Berlin launch of Operation Last Chance II, the popular antisemitic Vilnius-based daily Vakaro žinios (‘Evening News’) ran a short article on the subject on the International page of its weekend edition.  The purpose of Operation Last Chance is to locate remaining Nazi war criminals so that they can be brought to justice and have a fair trial in their own country (see www.OperationLastChance.org).

In the guise of news (rather than as a comment or editorial), the paper writes, at the start of the final paragraph, referring to Dr. Efraim Zuroff, director of the Simon Wiesenthal Center’s Israel office: ‘Zuroff didn’t say when the search for Jews who committed genocide in the former Soviet Union would begin’ thereby taking it as a given that (a) there were Two (Equal) Genocides, (b) there are Jewish war criminals out there who committed genocide on behalf of the Soviet Union, and (c) that in the interests of ‘equivalence’ (equality?) there should be an equal effort made to ‘find’ these unknown and unnamed ‘Jewish war criminals’.

This frequently recurring theme in the Baltic mass media reaffirms the intimate links between the sophisticated Prague Process trying to enshrine Double Genocide in European law and the base local forms of antisemitism rampant in the daily press. It is particularly damaging to Lithuania’s standing given the country’s record of having had the highest percentage of Holocaust-era murder of its Jewish population in wartime Europe, and the current impression given by such discourse of ever further obfuscation at each turn of the road.

The article, which ends with a reference to another antisemitic canard (alleged prevalence of Jews in the illegal organ trade…) translates as follows:

Wiesenthal Center director E. Zuroff said the center will provide rewards
of 25,000 euros for information about Holocaust criminals at large.

Zuroff said at a press conference: ‘Just because a lot of time has passed doesn’t diminish the guilt of the murderers in any way’  The new campaign, dubbed Operation: Last Chance II, is a continuation of an earlier program begun in 2002 in the Baltic states and expanded to Germany in 2005.

Zuroff didn’t say when the search for Jews who committed genocide in the
former Soviet Union would begin. Neither did he say what reward would be given for handing suspects over for organs.

An image of the original text follows. 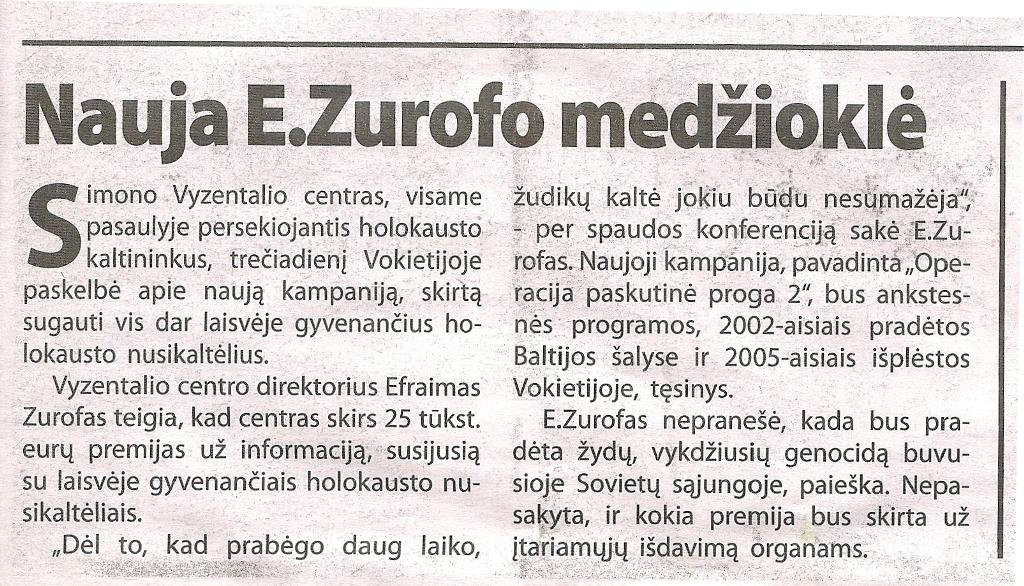