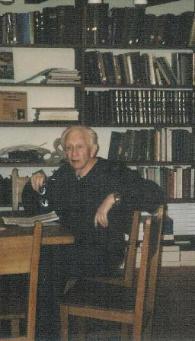 Holocaust in the Baltics, established on 6 September 2009, is dedicated to the memory of Professor Meir  Shub (1924-2009), pictured at right teaching a class at Vilnius University in the early 2000s. A historian and philosopher, he dedicated the last decades  of his life to rebuilding Jewish studies in Vilnius, despite severe health issues deriving from his World War II wounds inflicted during the struggle against Nazism. He was determined to inspire and train students of all backgrounds who would freely research Judaic topics, including the Holocaust. He was convinced that the success of these studies depended on the retention of a robust and intellectually free-feeling Jewish community component in such projects in Eastern Europe. His booming voice (which grew louder as his deafness worsened), straight talk, and high Litvak expectations of his students were trademarks. He is sorely missed. He played a pivotal role in achieving the first Oxford-Vilnius agreement in Judaic studies, and, in 1991-1992, was a visiting fellow at the Centre for Hebrew and Jewish Studies at Oxford University. His works include a study of the Gaon of Vilna.

This site is edited by Dovid Katz (www.dovidkatz.net).