Glorification of Holocaust Perpetrators in Ukraine

Per A. Rudling on the OUN, the UPA and the Holocaust in Carl Beck Papers

Per Rudling on Ukraine’s OUN and Lithuania’s LAF

Per Rudling interviewed by Chris Hale

Frank Brendle on the Honoring of Collaborators

The monument in Lutsk

Reports on the Bandera saga in Ukraine

This new ‘Communism = Nazism’ poster, produced this year by the Lviv City Council to celebrate the 70th anniversary of Hitler’s invasion, shows (at left) a 1941 Lviv photo (Lontskyi prison) depicting inmates who had been murdered by retreating Soviet forces, and — a group of innocent Jewish neighbors collected for imminent murder (prior to the establishment of German administration). The implication is that ‘Everything equals everything’.  Welcome to the eastern sector of the red-brown movement in Europe. 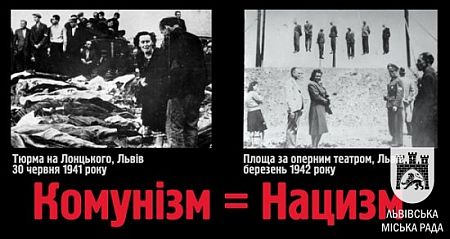