The following is a reprint of the interview given by Michael Schneider, executive director of the World Jewish Congress, dated 9 April 2014 and posted shortly thereafter on the website of the Jewish Community of Lithuania (PDF here). 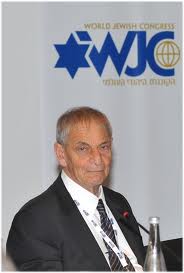 These crucial questions regarding the future of the institute are being considered with the participation of the Lithuanian Jewish Community, fated by history to work to maintain the vitality of the Yiddish language. M. Schneider has said Vilnius should become the central and most important venue for Yiddish language studies in the world. The WJC is prepared to allocate funds to help create added value to the institute currently operating.

M. Schneider is a Litvak, his grandparents left Vilnius for South Africa in 1927. While visiting Lithuanian Jewish community now he was interviewed for the website of LJC. This is what M.Schneider said:

“Vilnius means coming back to my roots. It’s a very beautiful city. I feel very good here. I walked around the Jewish ghetto, in the evening it was dark and empty, so it was impossible to get a feeling how it was in those days. My grandmother used to run a delicatessen shop and my father was a student of one of the yeshivas. I remember my uncles, one of my uncles used to be a very good football player. They called him Moshe the Footballist.  He was an outstanding Jewish scholar. My grandparents went to South Africa in 1927, and my grandfather became a religious leader revered by the Jewish community in a small town in South Africa. I know a lot about the scholarly achievements of Lithuanian Jews. I learned Yiddish from my mother.

“We are considering establishing a Yiddish institute, possibly in partnership in some way with the Lithuanian Jewish community, with Vilnius University where there is a course. So I just came to see what the facilities there are, what is already being done, what else additional might be required to upgrade the Yiddish studies in Vilnius, which was the spiritual center of a very large Yiddish culture.

“I don’t think there are many practical problems at the moment,it’s rather a question of thinking how we can create a value in addition to what has been already done. That’s a major exploration with the local Jewish community and with some partnership. We are holding a discussion on Thursday with the Jewish community, the World Jewish Congress and the ORT in order to decide who will be the head of the Yiddish institute.

“We have obtained some funding from an anonymous donor who doesn’t want his name to be mentioned.’’

“We have obtained some funding from an anonymous donor who doesn’t want his name to be mentioned. We are ready to fund it.

“That is why if we want to keep Yiddish as a living language, the best way to do it is in Lithuania. I am a Litvak. It will be an international center with prominent experts who are renowned teachers of Yiddish and who will form the staff of teachers who will work here.’’