The state campaign to “fix” the history of the Holocaust by blaming the victims and trying to turn the perpetrators into heroes would be laughable if it were not so tragic, coming from a partner European Union and NATO nation whose people have made such extraordnary strides toward democracy and prosperity and who frankly deserve wiser expenditure of funds from their state’s agencies.

A perverse inverse symmetry is in play. The defamation of survivors by the state’s agencies has coincided with the investment of ever more funds in memorials glorifying Nazi collaborators and actual perpetrators. For examples of that, see this journal’s Collaborators Glorified section, the contributions by Evaldas Balčiūnas and Milan Chersonski, and coverage of the 2011 program to glorify the Lithuanian Activist Front (which set in motion the massacre of Lithuanian Jewry before the first German soldiers even arrived) and the incredible 2012 specter of the reburial with full honors of the country’s Nazi puppet prime minister of 1941. Why for Jupiter’s sake, one would have thought that man would be something the country’s patriots would rather forget… To this day, Vytautas Magnus University in Kaunas features a bas relief and lecture hall name dedicated to honoring that Nazi puppet, who actually signed the order for all the Jews of Kaunas to be herded into a ghetto within a month (among other equally shameful documents). What will the representatives of that university being flown in to charm London Jews have to say about that?

Even as some Jewish personalities in London, far from events on the ground, have with no ill will succumbed to the temptations of diplomatic glitter stuck right onto the academic prestige dishonorably granted (for the second time in as many years) by the Department of Hebrew and Jewish Studies at University College London, the defamed Jewish Holocaust Survivors, now in their late 80s or early 90s, are being sent to eternity as “suspected war criminals.”

Is it too much to ask the Lithuanian embassy in London and its charming new ambassador to deliver the public apologies to the survivors, as a minimal gesture of good will and sincerity, before the start of this next conference? And will the head of the Hebrew department, who last time around boldly signed the letter of protest, again add her own voice of dissent that went a long way toward mitigating the dishonor brought upon the department, and by extension, UCL?

Journalists and diplomats have often met with a Lithuanian government response along the following lines: “Well, these investigations against the Jewish partisan veterans are not being actively pursued, and nobody is on trial, so what do you want?”

With their kangaroo accusations against Yitzhak Arad, Fania Yocheles Brantsovsky, Joseph Melamed and Rachel Margolis (in the absence of an iota of evidence), the Lithuanian authorities are in effect besmirching all Holocaust victims, survivors and resistance heroes. It is part of a campaign of state-sponsored revisionism that is trying to write the Holocaust out of history and replace it with the far right’s bogus paradigm of “two equal genocides.” Nazi war criminals are habitually glorified in public spaces as part of the process even as the victims are vilified. The free world has the obligation to stand up and say no.

This is an instance of rather simple justice. When a state’s prosecution service has defamed Holocaust survivors in public, it has the duty to apologize in public and bring the matter to a close. Instead, the same antisemitic prosecutors, associated with the antisemitic “Genocide Research Center” continue to spread trash against the victims while glorifying the perpetrators in a rather obvious attempt to rewrite the wider history in the spirit of the far right’s Double Genocide movement, even as it is all covered up by an endless array of lavish symposiums, conferences and conclaves “for the Jews.”

One of the saddest images of 2012 in this regard is that of this conference’s “convenor,” a world famous professor, being knighted in Vilnius this year by the president of Lithuania (between the first and second conferences) for his services to “Lithuania’s name in the world.” This at a time when the country’s last Holocaust survivors, in their final years, are defamed as alleged war criminals, the local perpetrators of the Holocaust glorified, swastikas legalized, and neo-Nazi parades sanctioned for the capital’s main boulevard on independence day.

This month’s Defending History pages feature the important new paper by Dr. Yitzhak Arad on the Lithuanian Holocaust and its obfuscation by the Lithuanian government. Dr. Arad is a Holocaust survivor, anti-Nazi resistance veteran, hero of the 1948 Israeli War of Independence, and beloved gentle scholar who for over two decades was the director of Yad Vashem in Jerusalem. As a gesture of good will toward Lithuania, he agreed in the 1990s to join the government’s commission only to be accused (after NATO and EU accession…), of “war crimes” himself for having survived the ghetto by joining the anti-Nazi partisans.

To this day, that commission has not issued a single word of public protest, and newly refinanced by the Lithuanian president (as de facto insulation from the subsequent elections…), several of its members are without shame or pain flying in to this shambolic UCL conference, courtesy of Lithuanian government funding, to pontificate on the Holocaust and put on yet another show of smiles and guiles for Western naifs. To add insult to injury, the conference’s stated purpose, rephrased to obfuscate, is to enable the replacement of the “simple” “Jewish” narrative by the (“complicated”) Baltic far-right model of obfuscation, confusion and inversion of the simplest moral distinction between perpetrator and victim. Professional Holocaust scholars who object to this view have not been invited to either of the two London conferences.

It does not occur to most people that a prosecution service of an EU/NATO state would defame Holocaust survivors on the basis of nothing. It is easy to try to brush it all away.

If anyone does need convincing of the effects in the real world of public defamation, they need only look up the Wikipedia entry for Yitzhak Arad (see image below, taken today; the red arrow has been added to point out the section on the kangaroo accusations).

When the international pressure finally did force the suspension of the charade, the prosecutors, in announcing they were dropping “part” of their investigation for “lack of evidence,” again defamed Dr. Arad while calling on the public to come forward with evidence (“Prosecutor General’s Office requests the society for assistance”), and attacking his book of Holocaust memoirs on the basis of an anonymous “Doctor of Humanitarian Sciences (expert-historian).” Is this secret expert-historian one of those being flown in for the London conference?

During a recent interview that appears in the 2012 documentary film, Rewriting History, the prosecutor in charge was asked to confirm that Dr. Rachel Margolis, 91, could safely return to Lithuania without fear of prosecution. He refused, in a reply that astounded the interviewer. Dr. Margolis, a Vilna Ghetto survivor, resistance hero and historian, is hated by the antisemitic far right for her rediscovery, in the 1990s, of the Sakowicz diary which clearly identifies the shooters of many tens of thousands of Jews at Ponár (Paneriai). Last year, former UK prime minister Gordon Brown had the courage to stand up for Dr. Margolis. Now what about the conference organizers?

Hopefully everyone attending this conference will be prepared to say publicly what they think of the ongoing defamation of the Holocaust’s victims, heroes, and scholars by the one government on the planet that has tried to prosecute Holocaust survivors who have “committed the crime” — of surviving. 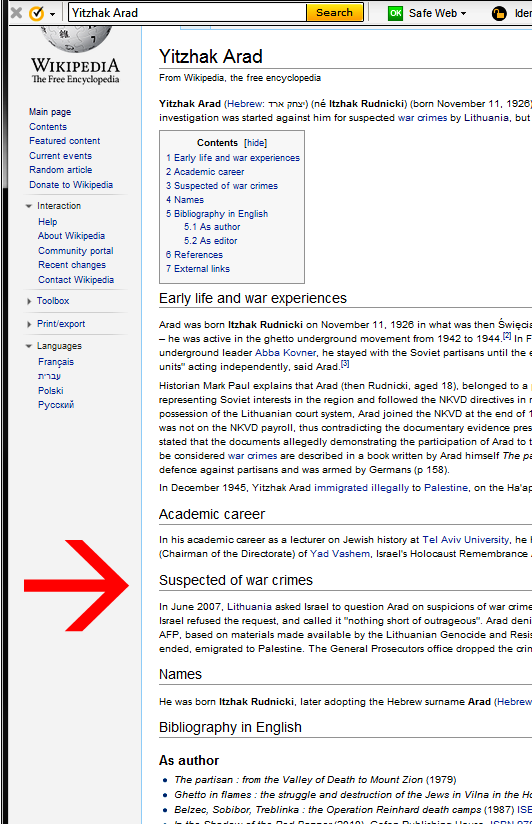 PERMANENT DEFAMATION? The effects of the Lithuanian government’s campaign of defamation against Holocaust Survivors who joined the anti-Nazi resistance, this during a time when more and more state sponsored memorials have gone up to honor local Nazi collaborators and killers of the country’s Jewish population during the Holocaust.