Vilnius Prosecutors ‘visit’ Lithuanian Jewish Community on Holocaust Remembrance Day, questioning ties to Survivor in Tel Aviv who is the latest to be ‘investigated’

Posted on 8 February 2010 by Defending History


Confirmation has been obtained that on Holocaust Remembrance Day, 27 January (respected internationally as the day marking the liberation of Auschwitz), Lithuanian prosecutors visited the premises of the Jewish Community of Lithuania at Pylimo Street 4, Vilnius, to question community leaders about their ‘knowledge’ of Joseph Melamed, a Holocaust survivor resident in Tel Aviv.

A native of Kaunas and survivor of the Kovno Ghetto, Mr Melamed is a decorated hero of the anti-Nazi resistance in the forests (1943-44) as well as of the Israel War of Independence (1948). A lawyer, author and retired Israeli diplomat, he is today the elected director of the Association of Lithuanian Jews in Israel, one of the world’s last active associations of Litvaks. 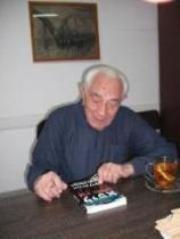 Mr Melamed told Holocaust In The Baltics: ‘If they want to ask me something why don’t they come and talk to me? Why do they disturb the tiny surviving Jewish community in Vilnius? Our offices are at King David Street 1 in central Tel Aviv, right off Rabin Square.’ Mr Melamed and the Association of Lithuanian Jews have provided a spirited and ongoing voice of disagreement with the Prague Declaration. They had been the first to challenge the underlying assumptions of Lithuania’s ‘red-brown’ commission back in 1998. Prosecutors have not disclosed what it is they wish to question Mr Melamed about. In the case of their ongoing campaign against other Holocaust survivors, there have been no charges, just defamatory statements and gestures of intimidation. Nor has any been cleared as their ‘investigations’ continue. By contrast, according to the Wiesenthal Center’s data, the Baltic countries have not punished a single Nazi war criminal since independence. Since 2006, they have been pursuing Holocaust survivors who joined the Soviet-backed anti-Nazi resistance, eliciting solid international condemnation, most recently from the United States Congress.

Updates on Russian language services: 10 Feb 2010 on Interfax; 11 Feb on Izrus, Jewish News Agency and JewishRu.   Photo of Joseph Melamed in his office with his book on Lithuanian Jewry (2010)

This entry was posted in Human Rights, Israel, News & Views, Politics of Memory. Bookmark the permalink.
↑ Return to Top