Posted on 7 August 2017 by Defending History

VILNIUS—One month ago, on 7 July 2017, twenty of the twenty-one elected board members of the Vilnius Jewish Community (the 21st was abroad) signed a full-hearted letter addressed to the Good Will Foundation, the Lithuanian government restitution fund for Jewish community survival deriving from part of the value of the communal properties owned by the annihilated religious Jewish communities of prewar Lithuania. To this date, there has been no reply from the Good Will Foundation, nor any statement from its esteemed foreign board members who represent the World Jewish Restitution Organization. The board’s co-chair is Andrew Baker of the American Jewish Committee, who is a recipient of a number of Lithuanian government medals over the years.

Noting the lack of any reply after the one-month mark, one of the Vilnius Jewish Community board members who signed the letter, Professor Josif Parasonis, himself a former deputy chairperson of the Jewish Community of Lithuania, released it to the media earlier today. A facsimile follows below. The document is also available as PDF.

Today also saw publication on Alfa.lt, a major Lithuanian news portal, of an article on the alleged ethical corruption of the current leadership of the official Jewish community allegedly in close collaboration with certain government officials. [Updates: The Vilnius Jewish Community posted a draft translation into English on its Facebook page; an English translation is available as PDF, and a Russian translation has appeared in an Israeli publication.] There are parts of the article, particularly on the violation of legitimate democratic process in the recent elections for chairperson of the Lithuanian Jewish Community, that coincide with last month’s letter from the twenty elected representatives of the Vilnius Jewish Community.

In a deep blow to the morale of the actual surviving Jewish community, the chairperson, with help from a handful of oligarchs on her board, changed the rules in the middle of the election campaign for chairperson last spring, to disenfranchise the 2,200 Jews of Vilnius and ensure her reelection by a closed circle of cronies and oligarchs (one of whom lives in Brussels and was granted two votes, i.e. twice as much representation as the 2,200 Jews of Vilnius; one of the two votes represents a museum that is not yet built, in a town with no Jewish residents). The actual Jewish community members who tried to attend were kept out by armed security guards at the 28 May “kangaroo election proceedings.” A disturbing incident in the same spirit was reported on 3 August by the Vilnius Jewish Community, when its elected chairperson, Simonas Gurevičius (Simon Gurevich), was stopped, by a burly security guard, from participating in a meeting of the LJC board of which he is a member and then prevented  for a time, by the same guard, from leaving the building.

In the eyes of some observers, the regime led by eminent attorney Faina Kukliansky, after losing a public air of legitimacy by allegedly stealing the election via the mid-campaign rule change, went on to try to delegitimize the public democratic election of the Vilnius Jewish Community held on 24 May by reacting to it with an effectively antisemitic article on the official community website, deleted after publication in Defending History and coverage by JTA. It led to an oblique apology (that also makes reference to a second version of the offending article), and further reactions from the community’s Professor Pinchos Fridberg, a Holocaust survivor, and Leonas Kaplanas, a world-renowned master piano educator. Some of their essays on community questions from recent years appear in the Pinchos Fridberg and Leonas Kaplanas sections in Defending History. 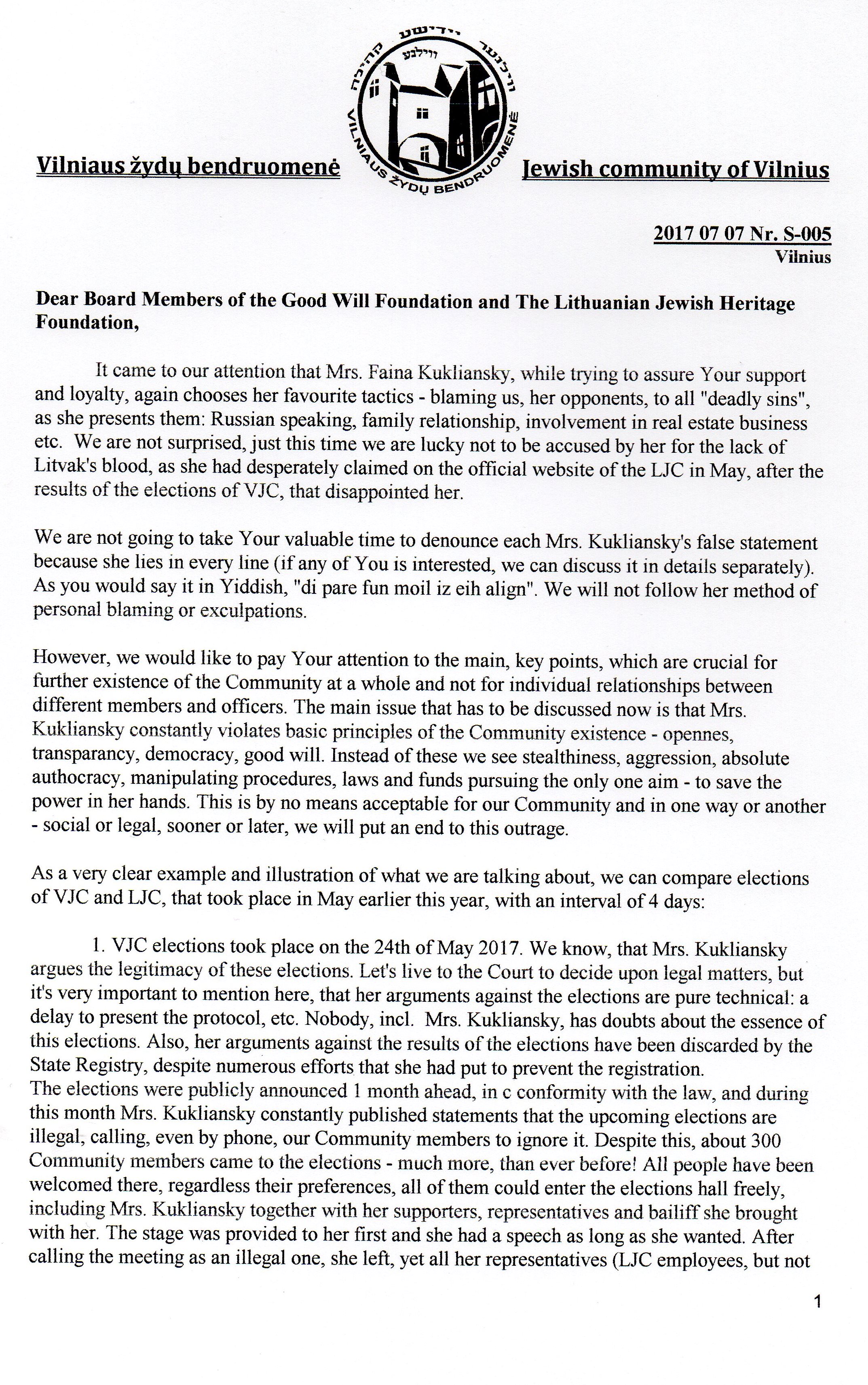 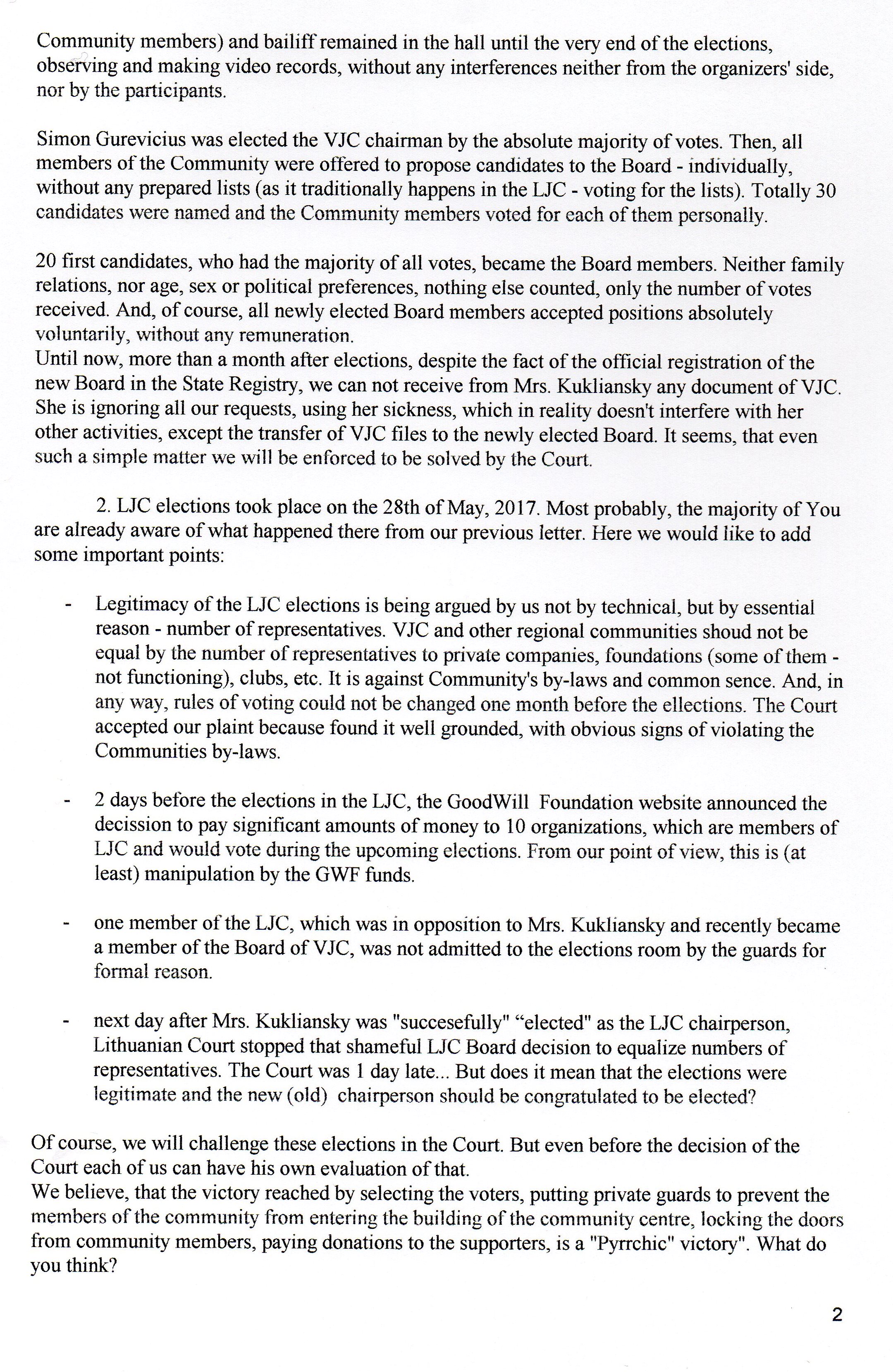 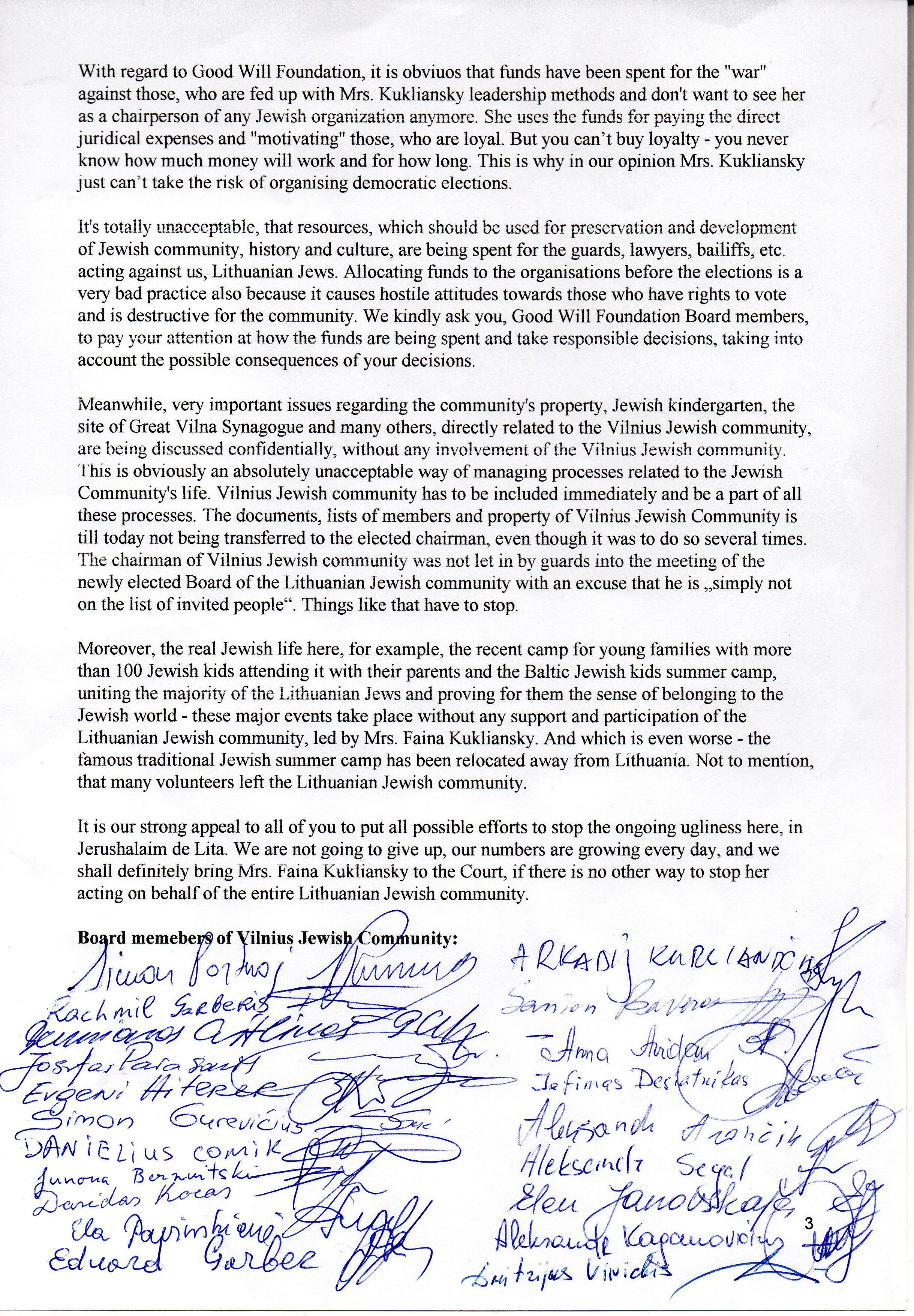