Posted on 5 September 2018 by Defending History

VILNIUS—The 21 person democratically elected board of the Vilnius Jewish Community, representing the approximately 2,200 Jews resident in the Lithuanian capital, today released an approved English translation of its 29 August 2018 statement on Jewish heritage in partnership with a number of smaller regional Jewish communities throughout the country. The original Lithuanian text is available here, and appears at the end of this report below.

Those following the saga of attempts to humiliate the Old Vilna Jewish Cemetery by situating a national convention center in its heart, will be encouraged by the explicit language concerning the project contained in the statement:

“In Vilnius, they want to restore a Soviet monster — the Sports Palace — and to dress it up in the modern clothes of a Congress Center, as if there is no better place for a high-status building in Vilnius than the old Jewish cemetery.”

One member of the Jewish community, Ruta Bloshtein, launched a petition that has to date attracted more than 44,000 signatures from around the world, pleading with the Lithuanian government to move the convention center project to another venue.

The following is the entire text of the English version released today.

However, at the same time we feel embarrassed by the fact  Lithuanian state authorities in Vilnius, Kaunas and Šiauliai issue construction permits and allocate enormous amounts of money from EU funds to renovate Soviet buildings constructed on the land of former Jewish cemeteries. The Soviets brutally ruined what was left undestroyed by the Nazis, in order to humiliate not only the living but also the dead.

In European, democratic and modern Lithuania, we should not follow a path which denigrates fundamental values of humankind. It is not acceptable when the authorities of state institutions ignore the voices of thousands of fellow citizens and take into account the position of no more than leaders of a single Jewish organization, the “Lithuanian Jewish (Litvak) Community”,  whose election has been declared illegal by the Lithuanian courts.

An incident exemplifying the general situation has transpired in Šiauliai. During the renovation of communications in the territory of a former Jewish cemetery, bones of the buried people were dug up, secretly moved out and mixed up with sand. It is an act of vandalism and, unmistakably, a crime. The Jewish Community of the Šiauliai Region together with a representative of the Conference of European Rabbis, in the presence of a representative of the “Lithuanian Jewish (Litvak) Community” met Justinas Sartauskas, the deputy mayor of Šiauliai City, and agreed to defer to an expert of the Conference of European Rabbis in the nearest future to prevent further vandalism. Just before the expert arrived, the Jewish community of Šiauliai Region was informed by telephone that there would be no meeting. The reason indicated for the cancellation of the meeting was a letter from the “Lithuanian Jewish (Litvak) Community” stating that, supposedly, only they are competent to deal with issues relating to the preservation of Jewish cemeteries in Lithuania.

Yesterday, on August 28th, despite of the appeals from Jewish Community of Šiauliai Region, the planned meeting was cancelled. In Šiauliai, using European Union Funds, they plan renovation of the Foster Home which is in the territory of the old Jewish cemetery.

In Vilnius, they want to restore a Soviet monster — the Sports Palace — and to dress it up in the modern clothes of a Congress Center, as if there is no better place for a high-status building in Vilnius than the old Jewish cemetery. In Kaunas, they prepare to turn the old Žaliakalnis Jewish cemetery into a “Botanical Garden”.

How far can we go in this direction? We insist that Jewish heritage issues not be dealt with excluding regional Jewish communities that unite the people who represent this heritage.

Therefore, once and for all we have to make a decision whether we proceed along the barbaric Soviet route, reviving monsters that destroy Jewish heritage, or, conversely, we choose a decent and honorable, though not easy way, which will promote the name of our country not only for its honorable history, but also for the decisions of the present. 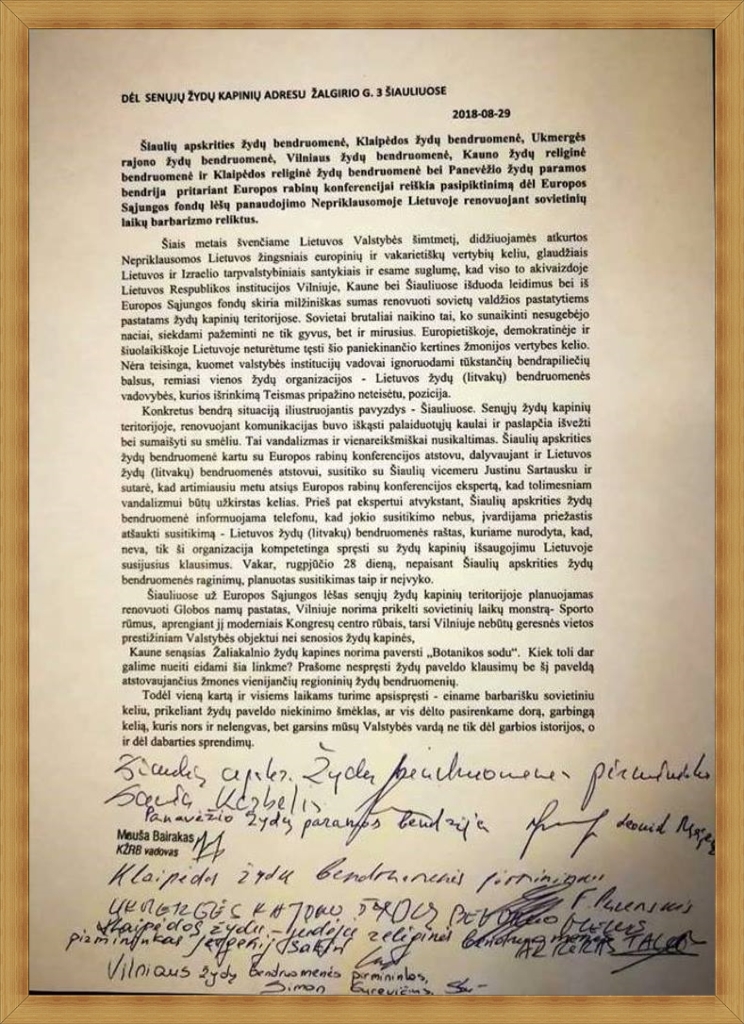