Posted on 14 August 2014 by Defending History


The following is a translation, by Geoff Vasil, of a news article in today’s Lietuvos rytas, available online in the original Lithuanian on lrytas.lt.

Aleksandr Dyukov: “Lithuanians are Nazi Collaborators Who Made Up the Occupation”

The Kremlin’s propagandist arrested at the Vilnius Airport, Aleksandr Dyukov, found out: he’s isn’t wanted in countries in the Shengen zone. After checking his documents and information in the database, border police working at Vilnius Airport told the arrival he may not enter Lithuania because he is included on a list of personae non gratae. After spending the night in special airport facilities, Dyukov boarded the first plane for Moscow in the morning. 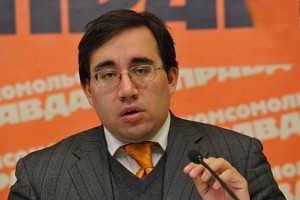 Dykov says deportees should be grateful the Soviet government saved them from the shame of the Holocaust. archival photo

This is not the first time this historian, known for his radical propagandistic statements, has caused trouble.

Dyukov, 38, is head of the Historical Memory foundation. This foundation claims it is a non-commercial social organization and alleges carries out unbiased academic historical studies of the past of Eastern Europe and Russia.

We Made Up the Soviet Period

Dyukov has tried using all the powers at his disposal to persuade his audience the Soviet occupation and deportations are nothing more than a myth made up by the Baltic states. Further, he has claimed many times the partisan struggle which took place in Lithuania was just a civil war.

Back in 2009 the propagandist explained his theory: “A real civil war took place in the republics after the war, especially in Lithuania, where the ‘forest brethren’ murdered more than 25,000 people over twelve years, 2,000 people per year. Nintey percent of those murdered were Lithuanians, not Russians. Thus trying to force this into the category of a struggle against occupation is inconceivable. It was a civil war. They don’t want to hear these facts in the Baltic states because there is a concept of occupation, of continuity, upon which the political regimes of these countries are based.”

The man became especially notorious when, after viewing Latvian director Edvins Snore’s film The Soviet Story, said: “I would like to kill the director of this film and burn down the Latvian embassy.” The film which kindled his ire reveals the crimes and similarities of the Nazi and Stalinist regimes.

The website of the Russian Historical Memory foundation also provides visual material in which Dyukov explains the film The Soviet Story is filled with falsifications and lies, and that its concept is in keeping with general trends in the Baltic states.

After making such statements, Latvia declared Dyukov persona non grata in March of 2012. He was entered onto a list of people who are not allowed to enter that country or other Shengen countries.

Dyukov believes history is supposedly being falsified in the Baltic states, that there are no serious scholars here and that the government dictates all facts. As if that weren’t enough, Dyukov claims Lithuanians were Nazi helpers.

The Soviet security organs, the NKVD, totally didn’t plan the June, 1941 deportation to Siberia of 17,500 Lithuanian residents. The Soviets were forced into doing this because they received information these people, the majority of whom were elderly and children, were Nazi collaborators, and in the event of war were prepared to shoot Red Army troops in the back.

According to Dyukov, the deportees should be grateful because the Soviet government saved them from the shame of the Holocaust.

The tendentiousness and imperialist interpretation ofo history in Dyukov’s compilation of documents is simply nauseating.

He tries to justify at any cost the Stalinist repressions in Lithuania, the murder of innocent people and the deportations, imagining the victims were in no way innocent lambs, but rather that these  “Lithuanian nationalists” under the direction of the Nazi-controlled Lithuanian Activist Front (LAF) constituted in Berlin were just chomping at the bit to stab the Soviet Army in the back and shoot the Jews.

As Lietuvos rytas correspondent Artūras Jančys once wrote, the conclusions which can be made from [these] tendentiously prepared documents appear absurd. These would include that children under 16 were preparing to wage war upon the Soviet government, of whom there were 5,000 in the deportations of June 14, 1941, and that potential Jew-killers included the 2,000 Jews who together with Lithuanians and Poles were deported to remote regions of the USSR.

Flying In to Present Book

He travelled to Vilnius this week to present [the Lithuanian edition of] his book called Eve of the Holocaust in Lithuania. The book was translated by the Gairės publishing house which made the presentation without Dyukov.

This book is yet another horrid slap in the face by the propagandist: it continues to push the idea Lithuanians were deported to Siberia because they were Nazi helpers and murdered Jews.

An authority among the current crop of Russian historians, Dyukov isforcing a patently mendacious conclusion upon his readers: the Sovietgovernment did not commit mass repressions in Lithuania and could not havecommitted them because there weren’t enough security personnel to carryout this task.

Dyukov spent the night in a jail cell at the airport and was sent back to Moscow in the morning.