A big part of the crowd comprised young people who particularly enjoyed the candle lighting, the smaller menorah of ice, and the large tent where traditional foods were served to hundreds of Vilnius residents. Chanukah menorahs were handed out to all who wanted one. 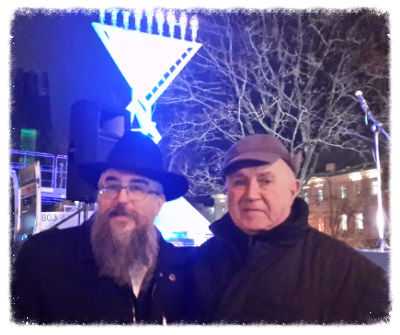 Rabbi Sholom Ber Krinsky, resident Chabad rabbi in Vilnius, with Professor Pinchos Fridberg, one of the last prewar Vilna-born Jews in the country, at Rabbi Krinsky’s 23rd annual grand menorah. Professor Fridberg was Defending History’s 2014 Person of the Year. The 2016 award will be announced on New Year’s Day.

Some participants, including the regulars of the synagogue’s daily prayer group, then walked on to the second major event of the night, the annual Chanukah celebration at the Choral Synagogue featuring speeches by dignitaries, song and dance by a young ensemble, and festive holiday snacks, highlighted by the cantorial performance of Vilnius cantor Shmuel Yusem, and a learned discourse on the Chanukah candles by Rabbi Kalev Krelin. LJC report.