The list of the buildings, where such gravestones (matséyves) with lettering had been found, was prepared by me for the community board. It included the following: stairs up the Tauro mountain; stairs to the Vingis park (from the road under the viaduct by the park); to the General Post Office (on Gedimino Avenue), to St. Peter and Paul’s Church, entrance to the Builders’ Palace, retaining walls near the school by Erfurto street in Lazdynai  and various other places. 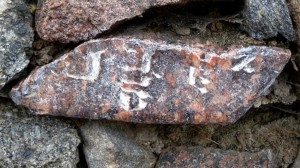 The list was sent to the mayor’s office and in 1993 most of those stairs were dismantled and the gravestones brought to a special storage place. The stones found during construction works later were also brought to that place. A great many of them were found during the reconstruction of Daukanto Square. On the slopes of the cemetery hills near Vasaro Street Jewish students organized a special subbotnik at the beginning of the 1990s and found a great many gravestones with lettering. Designed by an architect  Janutis Makariunas, a magnificent monument made up of those stones was erected on the territory of the former Zarétshe cemetery in 2004.

At present (2014) the author is aware of only two major city buildings which contain gravestones with visible lettering. They are the stairs of the Calvinist (Reformed Evangelical) Church on Pylimo Street and a small set of stairs outside the Contemporary Arts Center at the corner of Vokiečių and Rūdninkų streets.

Nevertheless, in many streets of the city one can see  plinths of buildings, staircases, retaining walls, even the toilet building (at the foot of Tauro Hill), made up of Jewish cemetery stones. There are especially a lot of them in the public garden by the monument to P. Tsvirka (Cvirka) in the Gedimino square that bears his name, and at the upper end of the city’s main boulevard including the monumental staircase to the National Mažvydas Library), in Jasinskio, Pamenkalnio, Pylimo, Basanavičiaus streets, and in the Lazdynai residential district.

Those edifices, built up at the end of  the 1960s or beginning of the 1970s, remain eternal monuments to the hundreds of thousands of Jews, who lived in our city not that very long ago. As the poet Semyon Lipkin put it in his Vilnius Courtyard (1963), the stones tell me

Nobody need mourn them.