Sad Day for Chicago (& Lithuania): Monument for Alleged Nazi Collaborator, an Icon of Lithuania’s Far Right, Unveiled on May 4 in Chicago by Visiting Foreign Minister

Posted on 1 June 2019 by Defending History

A Tale of Three Cities

UPDATE OF JUNE 1: Head of Jewish Agency calls for  monument in Chicago to Nazi collaborator to be removed “as soon as possible”

It was turned down by the New Britain, Connecticut City Council one year ago

On Ramanauskas’s Holocaust-era role see courageous, pioneering articles of Lithuanian ethicist Evaldas Balčiūnas in 2014, 2017 and his latest that has just appeared.

For years after starting his series of articles “Why does the state commemorate murderers?” Balčiūnas was hounded by prosecutors and police (scroll to May 2014).

RAMANAUSKAS: A FIVE YEAR SAGA. BEYOND THE HISTORY: WHY A MONUMENT TO A PRIME ICON OF TODAY’S NEO-NAZIS IN EASTERN EUROPE?

a major icon for neo-Nazi parades… 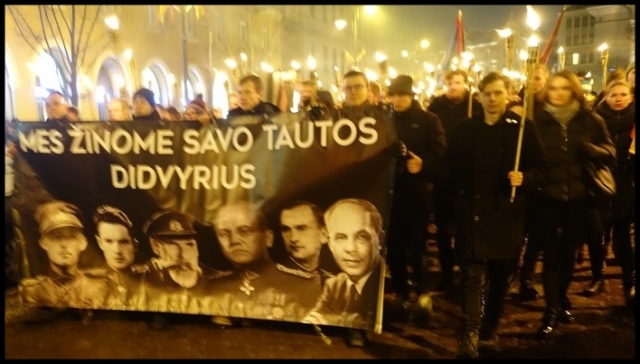 This monument, honoring Adolfas Ramanauskas (Vanagas), who boasted in his memoirs of leading an LAF unit of fascist Hiterlist militia during the first weeks of the Holocaust (June-July 1941) in southeastern Lithuania, was overwhelmingly rejected for placement on public land by New Britian, Connecticut one year ago.

But on Saturday, 4 May  it was inaugurated by Lithuania’s foreign minister on the private property of the Lithuanian World Center in Chicago, Illinois. The English news release casually omits the reference to the Holocaust  issues cited in the original BNS Lithuanian report.

On the legacy of Ramanauskas, see Evaldas Balčiūnas (in 2014 and 2017);Efraim Zuroff and the Simon Wiesenthal Center; and Dovid Katz. Defending History documented the entire 2017-2018 New Britain, Conn. saga. Sampling ofsurvivor testimony on “what it was that the LAF was doing” in the last week of June 1941.  SEE DEFENDING HISTORY’S SECTION ON ADOLFAS RAMANAUSKAS.

In addition to the history, Ramanauskas is a prime iconic symbol for today’s neo-Nazis in Lithuania. A frequently used front banner in torchlit neo-Nazi parades in Vilnius and Kaunas includes Ramanauskas “first”. Is this what Chicago chooses to present from Lithuania, a country with a proud thousand year history of truly magnificent heroes? This image is from 16 Feb.2018 in Vilnius.