Remarking to Defending History that “the document has not lost its urgent timeliness,” Bloshtein added her hopes that today’s rabbis would also stand up with integrity and courage against the commercial and political interests nowadays determined to build a vast new national convention center on the site which is still home to many thousands of graves, though the Soviets pilfered the above-ground gravestones. Bloshtein herself penned a powerful appeal to her Lithuanian countrymen to abandon the mass desecration in a July 2015 op-ed piece.

“This isn’t just about some Vilna issue. No! This is not just a Vilna cemetery, it is a cemetery that belongs to all the world!”

Major international rabbis, including the greatest Lithuanian-origin (Litvak) rabbinic authorities, have condemned the desecration as have various Christian and civic leaders (see our page chronicling the international opposition to date). Opponents have included a hasidic grand-rabbi in Brooklyn, an urban development specialist and a human rights advocate in France, a Protestant pastor for many years in Vilnius, a Lithuanian philosopher in the city, one of its last Vilna-born Holocaust survivors, and sundry international institutions.

The chief rabbi of Lithuania of eleven years’ standing was dismissed for standing up for elementary Jewish historical interests, after speaking up forcefully. There is widespread fear that organizations that exist to defend and protect old Jewish cemeteries, such as the US government’s “Commission for the Preservation of America’s Heritage Abroad” and the London-based CPJCE have been demonstrably manipulated in extremis, and are often seen to act in strict concert with Lithuanian government nationalists, the property developers’ commercial lobby, co-opted Jewish officials in the country, and corrupt foreign rabbis who “sell” other people’s graves by offering their “permissions” for building projects (confirmed by Wikileaks, Defending History, the Jerusalem Post and JTA). DH editor’s summary appeared last December in The Times of Israel. 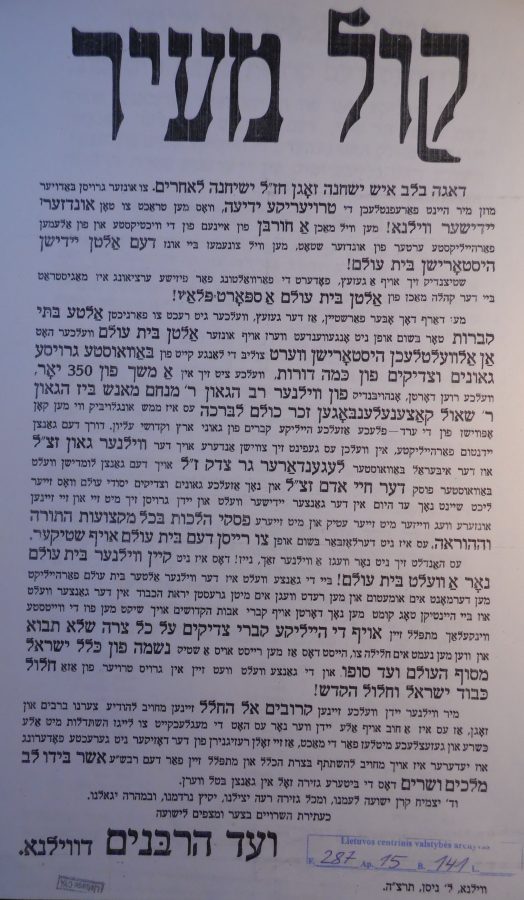