Posted on 3 August 2015 by Defending History

Over a hundred people gathered on August 2nd, 2015 at the Holocaust Memorial in Hyde Park to commemorate the liquidation of the “Gypsy Camp” at Auschwitz on August 2nd 1944 and the murder of between .5 and 1.5 million Roma in the Holocaust. 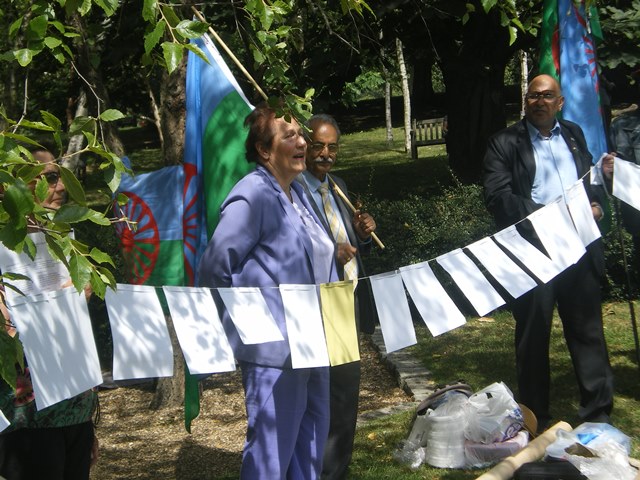 This was a very impressive gathering of Roma and Travellers from all over the London area but also from Birmingham, Liverpool and Manchester. As well as the familiar Roma/Traveller banners, a huge circle was created by participants all holding up a string bearing fact sheets with figures and stories of the victims and survivors of Porrajmos. A large map of the “Gypsy Camp” at Auschwitz was placed at the foot of the memorial and each person was given an armband with a large Z for Zigeuner, which Roma had to wear during the Nazi Reich.

Grattan Puxton, who has written books and supported Dale Farm and other projects, opened the proceedings with a welcome and then was honored for his devotion to the Traveller/Roma cause with a presentation of a special watch by Ladislav Balzac, chair of the ERN (European Roma Nation). A round of speakers then included Grattan, Ladislav, Phien (chair of the Gypsy Council), Michael Daduc about the Czech pig farm on the former Lety camp, Romana Masarova from Liverpool, Veerendra Rishi and Atmagh Singh of the Sikh support for Roma, Isaac Blake of the Cultural Group, Petr Torak of the Roma/Traveller Police Unit, Max Tollemache and Natalie Tamam from the Holocaust memorial Trust, Vivian Wienman (Board of Deputies), Rainer Schultze from Essex University, Dan Glass of “Never Again Ever” and myself representing Rene Cassin.

After the speeches lasting an hour, two Romanes anthems were sung, after which there was sharing of food in a picnic on the grass. A warm and friendly ending to a wonderfully interactive and supportive commemorative experience.

The first Holocaust Memorial Day, called Yom ha’ Shoah, was inaugurated by David Ben Gurion in 1953. As the world, at that time, had no mind to face the horror of the Nazi Holocaust, the Jewish community took it in their own hands. It was another 47 years before Holocaust Memorial Day January 27th was made an official international day of commemoration in 2000 starting in 2001. So it is not really surprising that in those intervening years it was understood by the Jewish community as a “Jewish story” not to be diluted by including anyone else. However the Holocaust “belongs” to the whole of Humanity – to face, learn, mourn and commemorate in full.

The Roma were as much victims of the racial laws as Jews. Roma were murdered alongside Jews in the camps, ghettos and killing fields. The infamous “final solution” euphemism was applied by Nazis to Gypsies as well as Jews – two whole peoples were to be destroyed, not one.

But all this was denied by the postwar German government, which claimed that Gypsies were executed as criminals and asocial misfits and not for racial reasons. The whole of Europe colluded with this misleading attitude to Roma as not being victims of racial genocide but “an asocial criminal breed,” hence the failure for so long to include them as the second people targeted by Nazism. But included they must be now. It is 33 years since 1982 when Germany finally recognised Roma as victims of Nazism and provided the money for a Sinti and Roma Cultural Centre in Heidelberg, out of which also came Porrajmos on August 2nd to commemorate murdered Roma ancestors (although it was held to some extent already earlier).

Porrajmos has not been widely recognised as part of the Holocaust until the last few years. Previous commemoration gatherings at the Hyde Park memorial on August 2nd have hardly counted a dozen attending and usually I was the only Jew. So it is very moving and inspiring that over 100 people came today with a large contingent of Jews, including Vivian Wineman, former president of the Board of deputies of British Jews, Natalie Tamam and Max Tollemache from the Holocaust Commission, Alex Maws from the Holocaust Education Trust, David Landau from Jewish Socialists, Monica Lowenberg representing DefendingHistory.com and myself representing Rene Cassin.

Inspiring as this event has been, it is the beginning of something that will, hopefully, grow year by year and become even more inclusive. The Holocaust cannot be brought to any sort of real closure while there is widespread denial of the preceding major genocide by the Ottoman Turks during World War One. 2015 is not only the seventieth anniversary of the end of the Holocaust but the centenary of the Ottoman Genocide. Had this genocide been fully acknowledged and brought to justice, the Holocaust could and probably would have been stopped.

The Jewish community, which has regained respect and its voice in the civic community, needs to reach out to help the Armenian and Roma/Traveller communities struggling to gain their rights to justice. This is at last beginning to happen. There is a Europe-wide project to bring together the three diasporas that have been persecuted for centuries: Armenians, Roma and Jews working together to learn about each other and create support systems together. Eventually it will, hopefully, become clear that diasporas are neither a burden nor a threat but an as yet untapped rich resource. 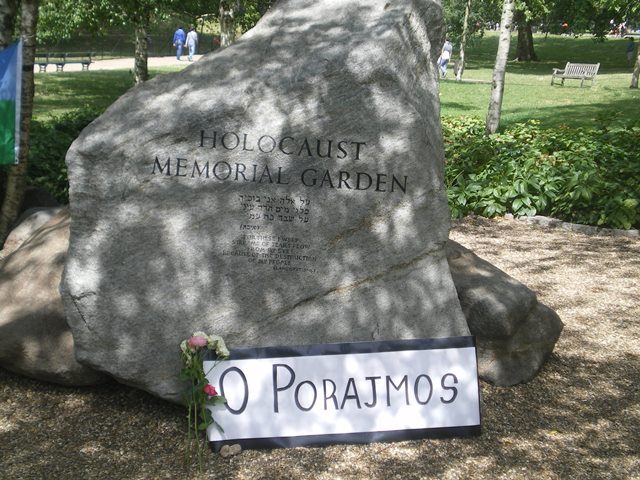 So I challenge all who read this account of today’s event to come to Hyde Park on August 2nd, 2016 and bring as many friends as possible to commemorate the Roma murdered in the Holocaust and to commemorate the murder of 1.5 to two million Christians in the Ottoman genocide on April 24th, 2016 as well as having an input on Holocaust Memorial Day January 27th 2016.