Posted on 11 December 2017 by Defending History

VILNIUS—Herbert Block, a veteran member of the American government’s Commission for the Preservation of America’s Heritage Abroad, and chair of its committee on the old Vilnius Jewish cemetery, visited yesterday and today for two sessions with staff of the Defending History team here in the Lithuanian capital. Mr. Block is a well-known and beloved figure for the Lithuanian Jewish community, with whom he worked closely for many years (1999 to 2015), during his tenure as Assistant Executive Vice President of the Joint Distribution Committee (JDC or “Joint”), where his work included coordinating successful efforts to achieve restitution that could enable the Jewish community’s survival for generations to come. At present, he is executive director of the American Zionist Movement (AZM). Previously Mr. Block served as Assistant Director for Intergovernmental and Public Affairs for the New York City Independent Budget Office (1996-1999) and was Deputy Director for Intergovernmental Relations at the federal Corporation for National and Community Service in  1994-1995.  He was Assistant to the Mayor of the City of New York from 1990 to 1993 and Special Assistant to the Manhattan Borough President from 1986 to 1989. For years he has been a member of the World Jewish Restitution Organization (WJRO) with specialization in the Baltic region and Poland.

Herb Block explained how hard he has been working behind the scenes to ensure the cemetery’s preservation, and pledged his firm personal commitment to work resolutely for the convention center project to be moved to another venue in town — away from Vilna’s Old Jewish Cemetery.

But Mr. Block’s affinity for Lithuanian Jewry and the Litvak heritage goes much deeper than his various positions of leadership in major American organizations that have worked in Lithuania. A deeply Orthodox Jew, he is a direct descendant of Chaim of Valózhin (known in Yiddish as Chaim Valózhiner) the philosophical “founding father” of the Misnagdic (Lithuanian-Jewish, non-Hasidic) religious tradition. Chaim’s father Isaac, and his brother Zálmen (known in Yiddish as Zélmale Valózhiner) are both buried in the old Jewish cemetery at Piramónt. Theirs are among the thousands of graves that would be grossly desecrated by plans to place a national convention center in the heart of the old cemetery, where revelers would attend congresses, cheer entertainers, drink in bars and flush lavatories surrounded by thousands of Jewish graves (a fate, as pointed out by a Christian theologian, that would never befall a Christian cemetery here in the twenty-first century). The Soviet regime pilfered all the gravestones, but many of the actual graves are intact, as demonstrated by ground radar, on all four sides of the Soviet-era “sports center” ruin that now mars the site and its neighborhood.

Mr. Block spoke at length (in Hebrew) with Vilnius native Ruta (Reyzke) Bloshtein, an Orthodox Jew who is the author of the international petition to save the cemetery, which has garnered 42,000 signatures from every part of the world. Ms. Bloshtein reflected on the spiritual aspect of living in post-Holocaust Vilnius and feeling a profound mystical strength and inspiration from the old Jewish cemetery’s sacred souls that according to Jewish lore reside on the site until the end of days.

During a long and productive discussion (in New York English) with Defending History editor Prof. Dovid Katz, Mr. Block explained how hard he has been working behind the scenes to ensure the cemetery’s preservation, and pledged his firm personal commitment to work resolutely for the convention center project to be moved to another venue in town. This can be curiously challenging, according to some reports, when the State Department itself interferes on such matters under the banner of geopolitical considerations (but of course the USCPAHA exists specifically to preserve heritage, not to be an ostensibly neutral chatter shop that serves to delay and obfuscate until it’s too late and buildings rise above old cemeteries of powerless minorities). He recounted that he has had to explain to many officials of both the Lithuanian and American governments that this is not, as sometimes portrayed, just some arcane dispute between the two feuding branches of Satmar hasidim. One of the two branches (the “Aaronites”) is affiliated with the London group accused of accepting immoral payments for permissions to build on old Jewish cemeteries, while the other is led by a grand-rabbi (rébe) who himself issued a powerful statement against the cemetery project (the “Zalmenites”). Mr. Block explained how he has pointed out the depth and breadth of the pain and anguish caused among some very diverse groups  both here and abroad. After all, it was noted at the meeting, the pleas to the Lithuanian government to move the convention center project have come from the world’s major Litvak rabbis, other major rabbinic organizations, numerous members of the Lithuanian Jewish community, heads of the Vilnius and Kaunas communities, the eminent Vilna Gaon scholar Rabbi S.J. Feffer, the former national chief rabbi, Chaim Burshtein (who was fired for speaking out on the subject) and writers who include a protestant minister, a Catholic philosopher, a Latvian journalist, and a French human rights activist. In 2017 alone, delegations met with the Lithuanian ambassadors to the United States, and to Israel, and with Vilnius’s mayor during his summer visit to New York City; a major video appeal featured Professor Shnayer (Sid) Leiman and Malcolm Hoenlein, Executive Vice Chairman of the Conference of Presidents of Major Jewish Organizations. Then, last summer, twelve United States congressmen wrote a powerful letter to Lithuania’s leaders. Professor Leiman, a leading world scholar on the history of the old Vilna Jewish cemetery — known as Piramónt in Vilna Jewish lore — has published a number of studies and articles on the subject.

It was noted more than once at the meeting that the U.S. government’s Commission for the Preservation of the American Heritage Abroad (known as USCPAHA) has since 2014 had the added tool of a United States Congressional Resolution that calls for the protection of cemeteries of minority groups internationally. One of the leading scholars who helped guide the Congress in preparing that resolution has contributed op-eds at various stages of the current sage is Professor Bernard Fryshman, including in 2015 and in 2017.

It was also noted, with cautious optimism, that a new Commission Chair was recently appointed, who, it is hoped, will act rapidly to “just do the right thing” and speak out with moral clarity in harmony with the Congressional resolution and American and Western values of respect for minorities and the rights of the deceased to rest in peace and dignity.

The meeting was also attended by a member of the Vilnius Jewish Community’s elected Council, who pointed out that it is important for his beloved country that the country’s new convention center be a place where everyone, whether from here or abroad, would feel comfortable attending events, not be a place where some people would forever refuse to enter on a matter of deep personal, ethical or religious principle. 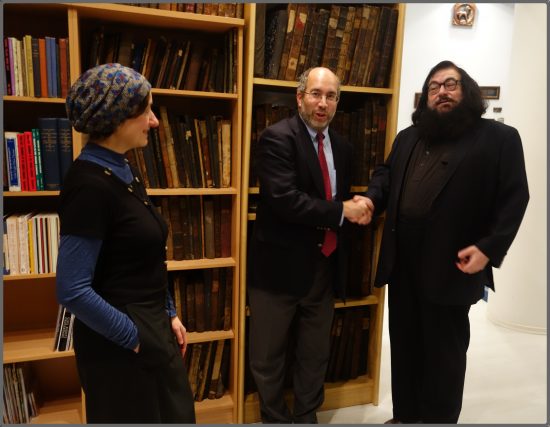 Defending History readers are asked to continue efforts to inspire further signatures for Ms. Bloshtein’s petition. There is growing sentiment among Lithuania’s most ardent friends and supporters that the nation’s capital deserves a  sparkling new congress center that will unite and bring pride and a spirit of welcoming to all the many peoples who trace their heritage to European history’s most tolerant empire, the Grand Duchy of Lithuania. The modern democratic Lithuanian republic, established in 1918, celebrates its centenary next year. As a small gesture of deep affinity and pride, Defending History has launched a virtual mini-museum of Jewish life in the interwar Lithuanian Republic.