VILNIUS—The following is an English translation (by Ludmilla Makedonskaya) of Professor Pinchos Fridberg’s article in Russian that appeared in the Vilnius-based publication Obzor on 26 May 2017. Note that the original Russian version is the only authoritative text for any issues arising. Professor Fridberg is a native of Vilna, a Holocaust survivor, a retired physics professor and the author of numerous articles and studies. For translations of a selection of his work on Defending History’s issues, in English translation, see our Pinchos Fridberg section.

For more information on the issue see the Lithuanian Jewish Community (LJC) website report on the 24 May elections held by the Vilnius Jewish Community (VJC), Defending History’s initial real-time report and rejoinder, the second version posted, the JTA report on the affair,  the subsequent LJC “apology” and Leon Kaplan’s essay on these pages.

First of all I would like to emphasize my neutrality regarding the conflict within the Jewish Community of Lithuania. Nevertheless, there are things that I cannot let pass by. The struggle for power must not spread beyond boundaries of ethics.

On the evening of May 24th an article appeared on the Lithuanian-languge page of the LJC website with the title: “Neteisetoje konferencijoje priimti sprendimai yra neteiseti?” (Are the resolutions taken at the illegal conference illegal)? The article contains the following phrase:

“[…] about 300 people gathered in the conference hall of the Karolina Park Hotel in Vilnius, mainly Russian speakers who call themselves Jews, with only a minority of people with Litvak blood” [highlight by P.F.]

Here is the image of the text: 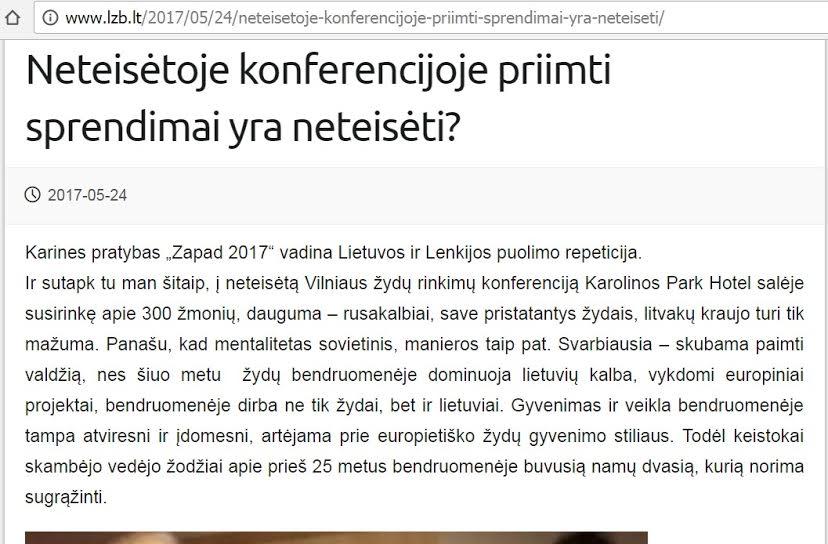 I could not believe my eyes: the website of the Jewish community published the words, which, in my opinion, resemble Nazi statements about the value of a person’s blood. The same day [May 24th] at 22:50, I sent the link along with the photo of the text to a number of addresses, including the editorial office of the newspaper Obzor. Twenty-four hours later I found that the link (http://www.lzb.lt/2017/05/24/neteisetoje-konferencijoje-priimti-sprendimai-yra-neteiseti/) did not work.

However, in Google’s cache nothing is lost.

Then this morning, on May 26th, an “apology” (Atsiprašymas) appeared on the Lithuanian page of the LJC website, which says:

“We apologize for the unedited text, which appeared on the site of the LJC on May 24th, having not been coordinated with the administration.”

Below the “Apology” it is stated that

“The apology is signed by Faina Kukliansky, the chairperson of of the LJC [Lithuanian Jewish Community].”

A strange apology. Does Ms. Kukliansky apologize on behalf of the Community (Atsiprašome [means “We apologize”)? The community is unlikely to have been involved in the publication. Or do they mean the administration of the community? Then they might do better to write “The community’s administration apologizes…”

How could it happen that this “Apology” does not include the information about carrying out an investigation and severe punishment of the person (or the people) responsible for the appearance of such an accusation on the community’s website?

One more thing. It is noteworthy that there was no “Apology” (at the moment this open letter was written, May 26th at 20:40) on the Russian language page of the LJC site. Does this mean that Ms. Kukliansky does not apologize to the Russian-speaking members of the Vilnius Jewish community?

I believe that the appearance of such a publication in the public space must be thoroughly investigated, and the author must be named.