As far as the deportations from Belgium, the Netherlands and France are concerned, only a few photos have survived and practically none of Jews waiting to be packed into cattle wagons for the long and often ultimate voyage to Birkenau, the death factory, symbol of the absolute horror that the Nazi regime represented for the Jews, the Gypsies, the Slavs and the so-called “opponents.”

The vast majority of the pictures depicting atrocious scenes of what is now known under the common name of the “Shoah by bullets,” or pictures of ghettos, brutality or sadistic acts, be they military or civilian, came from Poland, the Baltic States, as well as the Soviet republics under Nazi occupation.

They were chiefly taken by Germans. Voluntary, neutral or sadistic witnesses. And, even for those peculiar men who cannot be suspected of sadism or perverted voyeurism, how could we ever understand and explain the fact that these imperturbable German soldiers were mentally and physically able to take photos of Jews undressing in dunes or in an outside location moments before they were to be killed by bullets in front of gigantic common graves, others of Jews being tortured hours on end, others of alleged Jewish “partisans” hanged, how can we explain and understand that these ordinary Germans were able to take these pictures without any human reaction, without feeling disgust, without rejection of these monstrosities?

Nevertheless, as repulsive as such pictures can be, taken by SS men, normal or sadistic soldiers of the Wehrmacht, yet, they constitute the best evidence and source of some of the mass slaughters, an unimpeachable visual proof of that horrible killing machine the Germans devised under the name of the “final solution of the Jewish problem in Europe.”

Among the hundreds of photos that I have already seen in war histories or Holocaust books, at the time of my visits of museums and above all, these past years, during visits to museums dedicated to the Jewish victims of the Holocaust in Vilnius and Riga, there are four which I consider emblematic of that terrible feeling of solitude when one is facing death, that horrible inexorability of terror, these very moments of utter dread, of total helplessness, that the unfortunate victims and actors of these photographic scenes must have felt during the very last moments of their too short existence. An abomination all the more unbearable and inexcusable when we know that many of these pictures showed children, women, elderly people, all just about to be killed by inhuman and bloodthirsty brutes imbued by an encompassing racist and perverse ideology sparing no one who was declared enemy of the Reich.

Even now after having seen hundreds of such photos of Jews who had to endure these awful last moments of their life, who had to go through these hellish moments before dying, who had to feel in their very skin, body, heart and soul, what nobody during the long course of civilization had ever be “able” to devise as a form of mass sadism, even now after decades of pondering the reasons of these mass killings, even now, when I look at some of these emblematic pictures, I still feel all cold inside, as if an incurable wound had touched my soul just looking at these photographs and trying to realize how it must have felt, at those times for those particular Jewish victims of Nazi terror, to die in such a perverse and utterly inhuman manner.

The first photo which touched me is above all known in its shorter version. It was taken in Ivangorod in the Ukraine, in 1942, and shows on the left side a German soldier aiming a rifle at a mother hugging tightly her young child, a few seconds before their death by bullet. 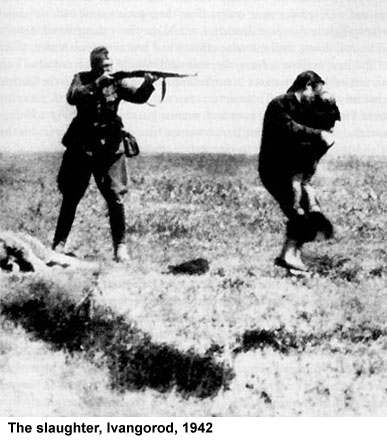 But the complete picture illustrates perfectly what the Shoah by bullets and the daily work of the Einsatzgruppen — the four battalions, 3,000 SS and SD personnel strong, the perfect killing machine, a creation of Himmler and Heydrich —, were like, as one distinguishes on the right side of the picture Jews bearing typical headdresses from Eastern European countries, digging a pit. Their own. 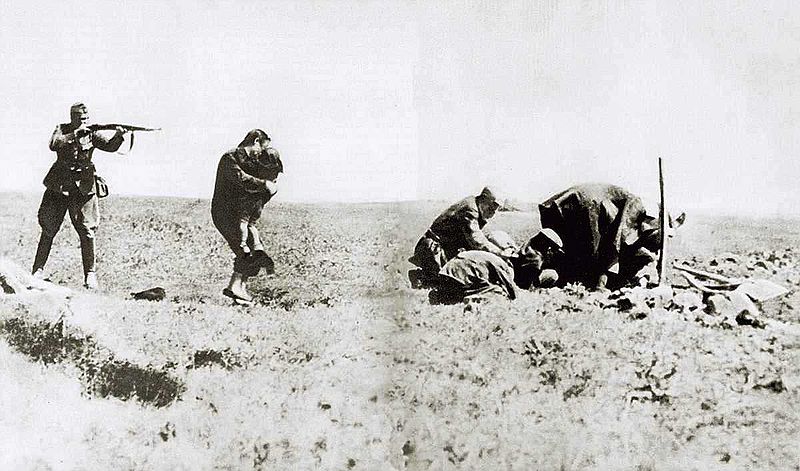 That is the reason why the second photo that chills me was the one taken on December, 15, 1941, inthe dunes of Šķēde near Liepāja, not far from the sea, in Latvia. It was taken by the (SS) Oberscharführer Carl Emil Strott. It shows five women and girls (the 1st, 2nd, and 4th, from the left are members of the Epstein family according to the caption at the Museum of the Jews of Latvia, in Riga), in underwear. There is an elderly woman at the center. On the right, two adolescent girls, the one at the extreme right of the line holds her hair as if she were posing for a normal photograph. The young girl at the extreme left seems terrorized, her head is partly hidden behind the arm and side of a woman who, I suppose, was her mother.The four women and girls looking at the camera have a dignified posture.

Their fate? A mass pit where they piled up alive and were then mowed down by the fire of rifles or a machine gun salvo. This massacre was perpetrated by the Einsatzgruppe A helped by Latvian antisemitic and pro-Nazi militias who were giving a helping hand. 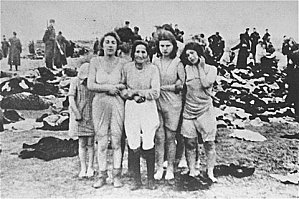 “The last Jew of Vinnitsa” is such an emblematic photograph from which one feels an incommensurable sadness. A forlorn Jew is sitting with his legs dangling above a pit and waits, in a quite sad manner, that the Germans would deign to kill him. He looks at the objective with an uncertain gaze, passive, almost placid.

At Kaunas, just after the Germans’ entry into the city, on 27 June 1941 one of the most barbaric slaughters that ever became publicly known took place. And, thanks to the pictures that the German Pioneer soldier Wilhelm Gunsilius took (his interview was showed on BBC 4 on 1 November 2012 in a program called “The Way to Treblinka”), we can understand the beastly nature of a mass murder, understand how it evolves and understand the sheer feeling of terror the male Jewish victims must have felt in such a hostile environment.

What makes this particular slaughter all the more unbearable lies in the particularities of this public massacre as the pictures were taken in fact during the whole process of slaughter while, for most of the other known mass murders, the pictures we know were taken after the killings. Immediately after the forced annexation of Lithuania by the USSR in June 1940 (according to the secret clauses annexed to the Ribbentrop-Molotov Pact of 23 August 1939), and, chiefly, after the mass deportations of Lithuanians and Jews alike to the Gulag in June 1941 — shortly before the invasion of the country by the Germans — many ethnic Lithuanians (thus not Jewish) came to identify all Jews with the NKVD and Communism.

The explosion of joy that the Wehrmacht’s entry into the country provoked within the Lithuanian population went hand in hand with an explosion of rage and hatred — allowed at last and actually encouraged! — directed at their supposed enemies, the Jews.

In the garage court of the agriculture cooperative situated on Vytautas Boulevard in Kaunas, Lithuanian “freedom fighters” armed with iron bars, received a free hand to slaughter 52 Jews. This horrible slaughter went on for five hours. 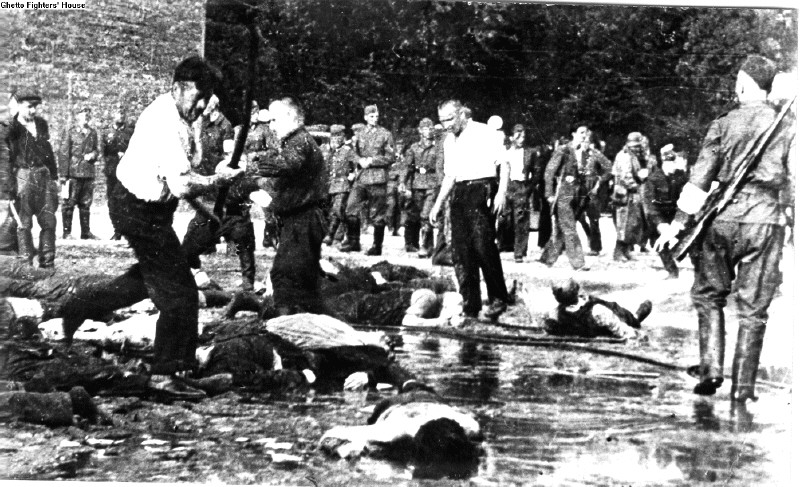 And, at the end of this massacre, which would have been unbearable to witness for ordinary and “normal” people, the German photographer Gunsilius asked a civilian spectator why they were then playing the accordion and what tune were they playing so joyfully? The answer was that the National Lithuanian Anthem was being played! 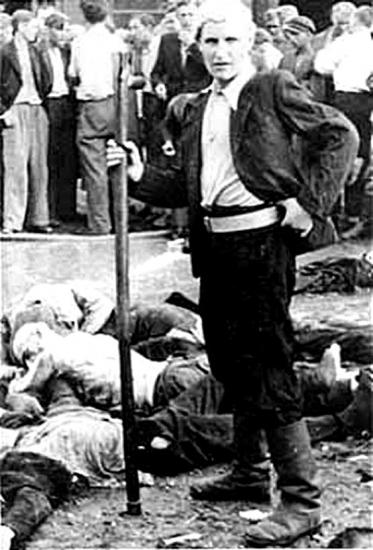 Why, then, hark back to these pictures after such a long time and so many books and comments have already been written and given on that matter?

I think there are, basically, two reasons for me as a gentile European who wants to remember how inhuman the Germans and their collaborators were been during World War II.

First of all, I feel a peculiar sadness when I can link what happened to the Jews in the territories occupied by Nazi Germany to some faces or silhouettes bequeathed to us by means of pictures taken moments before their disappearance in atrocious conditions.

And, secondly, the pictures that I described were taken in the Ukraine, in Latvia and Lithuania, countries where even now there are still wide strata of the populations professing their open admiration for those men among them who, more than half a century ago, fought alongside the Nazi murderers,often as SS or police battalions troops, death camps guards, or who collaborated in exterminating the Jews.

And, even if I can accept that these populations were anti-Soviet and that some of the men chose to fight against Communism (in their deranged opinion, Germany was thus considered one of the lesser evils), what I will never understand, forget nor forgive is that with that same warped logic, these anti-Soviet populations turned on their Jewish civilian neighbors who had nothing to do with Communism or politics, and participated in mass murders such as happened in Lvov (then part of the Ukraine), Riga, Kaunas, Vilnius, and countless other places, where thousands of Jewish civilians were slaughtered just after the Germans’ “glorious entry” into these cities or villages.

Or that these same thugs collaborated in robbing, torturing, tracking down, escorting the Jews fated to die by the bullet alongside pits, in many instances killing them themselves.