Posted on 5 February 2012 by Defending History


The following is the text of the petition created by Olga Zabludoff today on Change.org.

Lithuanian Ambassador to the United States: Ban Neo-Nazis from Desecrating the Dignity of Lithuania’s Independence Day

This petition was delivered to:

For the fifth time in the past five years a neo-Nazi parade (this year with a permit enabling a maximum of 2,000 participants) will march through the heart of Vilnius on March 11, Independence Day, one of the proudest and most significant days for the people of Lithuania. The neo-Nazi theme will be “Homeland.” Their display, if permitted by the government, will be taken by extremists throughout the region and Europe as a stamp of growing approval of neo-Nazi activities and a signal that the murder of about 95% of Lithuania’s Jewry during the Holocaust, largely by local collaborators, is taken lightly by today’s government. 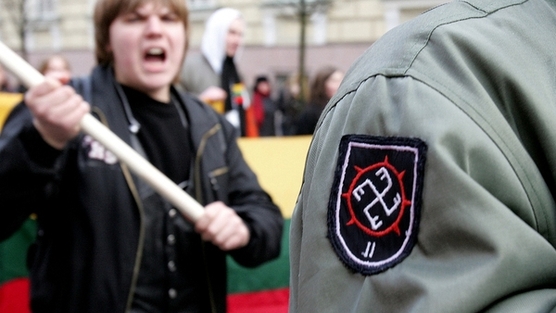 It is my understanding that the municipality of Vilnius has issued a permit to the Lithuanian Nationalist Center and the Union of Lithuanian Nationalist Youth for a parade to take place in Vilnius on March 11, 2012 – Independence Day in Lithuania. These two neo-fascist organizations have blatant records of extremist public anti-Semitism. The theme of their parade will be “Homeland.” Its participants will march from Cathedral Square along Gedimino Prospect to Lukiškių Square. Up to 2,000 individuals are permitted to take part in this march.

What kind of message is a neo-Nazi march on the main boulevard in the center of the capital of an EU/NATO/OSCE member nation, proceeding legally on the nation’s Independence Day?

Last year during the Independence Day neo-Nazi parade, Vilnius’s only functioning pre-war synagogue was defaced with the words “Juden raus.” The participants in the parade displayed fascist symbols and chanted Nazi German slogans against ethnic minorities. Last year there were about 1,000 participants; this coming March 11 permits no more than 2,000. Is this the chilling forecast of a spreading malignancy among Lithuania’s youth?

On one of the proudest and most meaningful days on the Lithuanian calendar, these affronts serve as terrifying and painful memories for the country’s small minorities of Jews and Roma, and to ethnic Russians, Poles and others who have been targets of abominable chants in previous years. They are also insults to all decent Lithuanian citizens as well as blemishes on their government who will tolerate these indignities. It is an affront to the free world that can only cause damage to Lithuania’s standing in the world.

Please ensure at the earliest time that these permits will be revoked. Please ban these neo-Nazi parades from the beautiful streets of the magnificent capital of Vilnius.