Chelm or New York? Yivo Fires All its Librarians, While Investing “Fortune” in PR for Lithuanian Government’s “Jewish Politics”

Posted on 21 January 2020 by Defending History

The Yivo Institute for Jewish Research, founded here in 1925, in historic Vilna (then Wilno, Poland; in Yiddish forever Vílne) as the world’s premier Yiddish-in-Yiddish academic institute, has, to the consternation of many of its life-long supporters and participating scholars, in recent years been (temporarily, to be sure) “hijacked” to serve as the prime unit  (with the AJC a close second) for Jewish PR. Not “general” Jewish PR but specifically on behalf of certain circles in the Lithuanian government determined to revise Holocaust history (and “sell” the revisions to American Jews particularly), while covering for the use of major Jewish cemeteries for building projects, all the while projecting adulation of “Litvak and Yiddish culture.”

Two of the best-known protests from Holocaust survivors  in Vilnius came from Milan Chersonski, longtime editor of the Lithuanian Jewish Community’s quadrilingual newspaper, and Vilna-born physicist Professor Pinchos Fridberg. More pain was expressed in responses from the Leyzer Ran Family in New York, and the Association of Lithuanian Jews in Israel.

Nevertheless, Yivo’s position as the world’s premier Yiddish Studies library and archive remains unshaken, and continues to grow. Even critics are in full support of the major digitization projects underway to bring these treasures to scholars and students around the world gratis.

There was, therefore, all the more shock this week when the Forward published the news that Yivo has just fired its entire staff of librarians in New York City. Before the publication, the rumors floating in Jewish library circles were taken to be a kind of malicious joke devised by wags among the director’s local critics [update: see now international petition]. In the annals of the institute’s storied history, this follows upon the 2014 dismissal of its last professional Yiddish scholar.

In the meantime, publication of a major scholarly volume, The Lost Library: The Legacy of Vilna’s Strashun Library in the Aftermath of the Holocaust (Brandeis University Press), by Dan Rabinowitz, has meticulously exposed a policy of lack of forthrightness concerning the fact that the majority of books Yivo admirably rescued after World War II (from Germany to New York) belonged in fact to Vilna’s great religious-volume focused Matisyohu Strashun Library. For seventy years this has not only been covered up, but some (an unknown number) of the Strashun treasures have been sold off for income and a contrived history published on more than one occasion. Last week, Rabinowitz was in Vilnius where a book launch attracted academics, diplomats, Jewish community representatives and Yiddish students. It was attended by 97 year old legendary hero of the Vilna Jewish partisans, Fania Yocheles Brantsovsky, who has vivid memories of both the Yivo and Strashun libraries before the war.

“Wait a minute! Has the world’s greatest Yiddish library just fired all its librarians?”

While Yivo’s librarians in New York have lost their employment, and the only two Yiddish classes in Vilnius continue by volunteer teachers (“no Yivo support there”), the institute’s director, Dr. Jonathan Brent, an eminent American scholar, editor and academic publisher, has recently been awarded a prestigious medal by the president of Lithuania for “promotion of the name of Lithuania in the world.” Some see the award as part of a larger pattern of honoring useful foreigners in the quest to “repair” the history of the Holocaust in the Baltics and cover for what is in store for the Old Vilna Jewish Cemetery. [Update of 27 Jan. 2020: Americans can now sign up to go on a tour of Vilnius personally led by Dr. Brent in April, and meet representatives of the US and Israeli embassies at special dinners.] 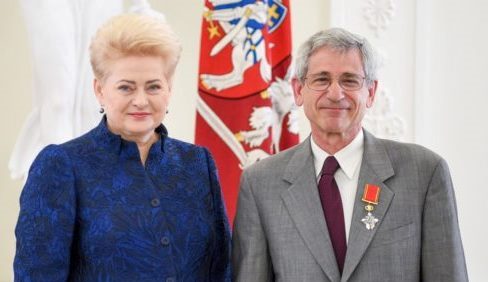 World’s greatest Yiddish library, in New York, has fired all its librarians. But the director has his Cross from the president of Lithuania (July 2019).