KAUNAS—The Religious Jewish Community of Kaunas, centered in the city’s storied Choral Synagogue, has just produced something very rare in the contemporary Lithuanian Jewish scene. It is a commemorative coin that is both traditional and novel, while honoring the language of the actual annihilated Jewish communities of Kaunas (also known historically as Kovno, Yiddish Kóvne). 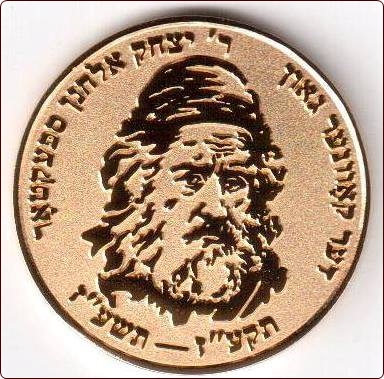 Arguably Kóvne’s most enduringly famous Jewish religious personality, Rabbi Yitskhok-Elkhonon Spektor (Isaac Elchanan Spector and other spellings), who lived from 1817 to 1896, inspired generations of Lithuanian yeshiva pupils, penned major commentaries and Talmudic works himself, and proved himself a genius at achieving maximal communal unity across the Litvak religious world, including large swaths of present day Lithuania, Latvia, Belarus, Poland and beyond.

In 1917, on the hundredth anniversary of his birth, the yeshiva world took the unusual step of minting metal medallions featuring his visage on one side, his famous Kóvne yeshiva building on the other, and containing the dates of his birth and death. In the traditional culture largely averse to human images, this was a truly exceptional event, signifying the larger-than-life status of Rabbi Yitskhok-Elkhonon Spektor among Litvak and East European Jewry more broadly, but among the Jews of Kóvne most intimately. They were, at some level, perhaps looking for their own Kóvner góen (Genius of Kovno) as a parallel, even if an imperfect one, to Vilna’s Gaon, the Vílner góen.

Following in the footsteps of the original medallion and its spirit, but using Yiddish for the text, and traditional Ashkenazic Hebrew usage for the rabbi’s surname and the years (according to the Hebrew lunar calendar) of the rabbi’s years of birth and death, the new medallion actually puts in writing the words that Kóvne’s Jews once upon a time called him: der Kóvner góen. It therefore succeeds in bringing to new life a phrase that once came to symbolize a hope and aspiration of Kóvne’s Jewry.

This is in sharp contrast to an array of recent Jewish PR activities that sideline Yiddish and local Jewish culture in favor of dominant Israeli or American Jewish styles that have little meaning in Lithuanian Jewish culture, history and lore. Blatant disrespect to Litvak and Jewish mores have been evident in recent street plaques and postage stamps, among other ventures.