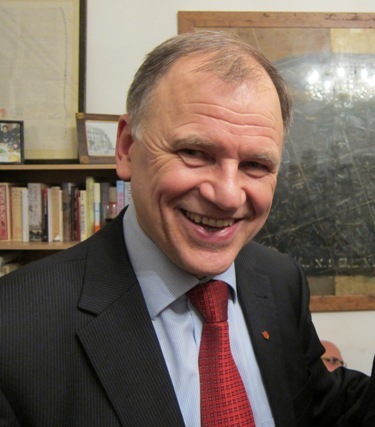 In its very preamble the Constitution says that “the Lithuanian people, celebrating the ethnic harmony of the land of Lithuania, seeking an open, fair and moral civil and legal state, by the will of the citizens of the reborn state of Lithuania adopt and promulgate this Constitution.”

After granting citizenship to all residents of the Lithuanian Soviet Socialist Republic in 1989, it was by the will of these citizens that Lithuania, her civic people, adopted this constitution by referendum in 1992. And set the goal of establishing not a nationalist [ethnic] state, but rather a civic and legal state [“..a state of the citizens under the rule of law”]. The reborn citizens of the state of Lithuania, independently of ethnicity, are today as well creating an independent, democratic state.

It is indisputable that the nation creates the Lithuanian state. And no one may infringe its sovereignty. That’s the reason the third article of the Constitution states: “The nation and each citizen  — and I stress, not ethnic compatriot — have the right to resist anyone who makes attempts against the independence of the Lithuanian state through force.” Thus the citizen and the nation complement one another. That is also why citizenship (but not ethnicity) is acquired through birth and in other cases as prescribed by law. It doesn’t matter what ethnicity a citizen of Lithuania has, his or her children are citizens of the civic Nation of Lithuania.

Section two of the Constitution is dedicated to human and civil rights, freedoms and responsibilities of the citizen, but not of the ethnic compatriot. That is something that you, Mr. Čekutis, cannot comprehend. And every Lithuanian is allowed to live in Lithuania but he doesn’t acquire citizenship automatically if he is a citizen of another country. The Constitution defends Lithuanian-ness, the language, writing and customs, but does not grant the right to nationalists and/or other radicals, often enough the representatives of fascist organizations, to hold a monopoly on ethnicity and Lithuanian-ness and to decide whom to consider a Lithuanian and who needs to be shot. These principles of the Constitution of Lithuania are difficult for you, Mr. Čekutis, to understand. It appears as if you, through the agency of your convictions, stand among the ranks of the Stalinists, Nazis, fascists and nationalist anti-democrats, although you attempt to distance yourself from them in your words.

The Lithuanian Constitution forbids the incitement of ethnic, racial and religious hatred, violence and other efforts infringing upon the dignity of the individual, and it speaks of every person of Lithuania, independent of ethnicity. You, Mr. Čekutis, know that, and yet in your articles, comments and your organizing of marches where slogans to incite hatred are shouted, intentionally undermine the constitutional goal of the citizens of reborn Lithuania to celebrate ethnic harmony and to create an open, fair and moral civil and legal state [“state of the citizens and under the rule of law”].

At the march on March 11 this year there were slogans chanted such as “You’ll get it in the teeth” (chanted at the beginning of the march at the Cathedral), “Lithuania for Lithuanians,” and the sign “For Lithuania, for Race and Nation.” And then there are the white armbands with the burning swastika in the center, and other neo-Nazi symbols. So these actions against the Constitution of the Republic of Lithuania have become too plain not to be able to perceive the tendentious direction of your beliefs.

The Lithuanian Constitution also enshrines constitutional mechanisms for harmonizing national and EU law. But in speaking about the principle of the supremacy of national law, you either intentionally forget that, or do not understand, or are acting maliciously. It is also an anti-state position to intentionally spread lies and disinformation.

But now about happier matters. You know that I was born in Stalin’s gulag, that I was not a Young Communist nor a Pioneer nor a Communist, that I took part in the creation of the folklore movement, in anti-Soviet activities, and that I was arrested by the KGB in 1976. During interrogation they threatened to send me back to Siberia. But in Kaunas in my teens we had this saying: “I saw you in the grave with white slippers.” I’ll translate that for you: To see you in the grave, so to speak, means I’m completely unafraid of you.

In the security prison cell I repeated this saying. This saying helped me and has helped me many times. It helped when the Landsbergis and Terleckas berets tried to intimidate me, when the Čepaitis-follower G. Songaila collected signatures against me to remove me as a deputy, when fanatic Sajudis radicals set my apartment on fire in Vilnius in 1992. And when I was slandered in 2004. After all, after that the prosecutor general apologized to me in court for matters of honor and dignity. So it’s a good saying and allows one to assess the situation soberly.

There is also the folk saying that one doesn’t give many blows in exchange for one blow.

Fate has allowed me to be a member of and author of one of the texts of the EU Constitutional Working Group, of the Constitution of Lithuania, of the March 11 [1991] documents, to put my signature to these documents, and I am the author of many laws, so I have a reason to die — or be shot — happily.

But I’d rather quote to you an excerpt of the poet E. Mieželaitis:

Recently there was this slogan: “How much of Drasius is there in you?” [reference to the Drasius Kedys affair]. So, Mr. Ričardas Čekutis, how much of Drasius do you have? If you’re not a coward, not a slouch, go ahead! After all, you yourself said: “Well, you will see very soon…”

I will take the legal route. Not a lynching, as happened in Garliava [reference to the same affair], shooting two people down, not the passions of the street still traumatizing a small child, the relatives, the mother and the public. And enabling different bastards to feed from this and manipulate the public’s consciousness.

I, having read your text, perceive an incitement to commit murder, a call to take illegal actions and a warning that we will all see this very soon. This is no longer an opinion, but an action which carries responsibility according to the criminal code.

The Constitution and the law allow me to defend the independent, democratic state. And this is what I’ll do in regard to you. Using legal means, not shooting, which you as a coward are encouraging. So we will meet at the prosecutor general’s office, since you are after all an official employee of the Center for the Study of the Genocide and Resistance of the Residents of Lithuania, though on parental leave.

Until future meetings, Richard the Coward.