It is no diminution of respect to those who indicated their disagreement by speaking out separately, elsewhere, later, earlier, whatever. But that none thought of looking the neo-Nazis in the eye and telling them with mere presence that no, they could not hijack the cherished day celebrating the declaration of independence in 1918, only fed into the European “gossip” that human rights organizations in this part of the world, for all their truly excellent intentions, can occasionally be prone to excessive timidity and the dangers of manipulation by government units concerned with issues of image and PR. Such concerns may potentially inhibit the kind of bold responses called for in the case of neo-Nazi activities that themselves find high-level support in various government units, including the nation’s parliament.

This journal noted the dozens of physical threats among the “charming comments” following the eminently fair interview published by Lietuvos rytas journalist Nerijus Povilaitis the same day (English translation here). The following day, we received a phone call from the paper urging us, for our safety, to report these comments to prosecutors for appropriate action. (We did not, recalling that they might still be busy looking for Rachel Margolis and Fania Yocheles Brantsovsky.)

More recently, one of the far-right sites spearheading recruitment for the next neo-Nazi march — the main annual event — in the city center of the capital, Vilnius, next Sunday March 11th, commemorating the declaration of independence of 1990, published the following cartoon:

An attempt to reproduce the effort’s Lithuanian-German text with English as the base language follows. 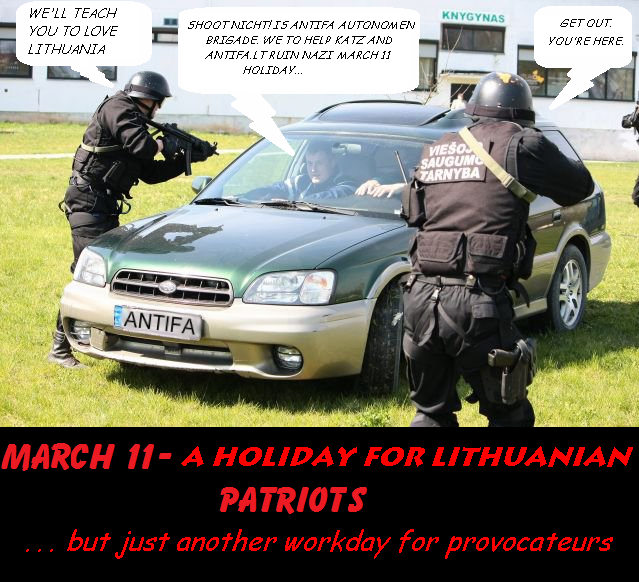 While I alone have the honor to feature in the cartoon’s speech balloons, a paragraph further down accuses a gang of four (Milan Chersonski of Vilnius; Olga Zabludoff, creator of the international petition to ban the neo-Nazi march; Efraim Zuroff, director of the Wiesenthal Center’s Israel Office; and myself) of spoiling their fun.

“Ethnic anti-fascists and foreign citizens Dovid Katz and Milan Chersonskij’s to date unsuccessful but unrelenting efforts to receive unfriendly attention from the participants of the February 16th holiday march in Kaunas, the attempt by the high-faluting surrogate called the Human Rights Watch Institute to steal outright the time, venue and even format of the already-traditional nationalist youth event, Olga Zabludoff’s and those of other enemies of human rights in the United States petition to the Lithuanian ambassador, statements by constant slanderer of Lithuania Mr. Zuroff, and so on and etc., clearly demonstrate the aspiration to hinder and not allow Lithuanian patriots to happily celebrate the state holidays dear to them.”

[NOTE: Milan Chersonski (Chersonskij) has been a citizen of Lithuania for close to seventy years. He was director of the Yiddish Folk Theater of Lithuania from 1979 to 1999 and from 1999 to 2011 edited Jerusalem of Lithuania, the quadrilingual newspaper of the Jewish Community of Lithuania. As for myself, I guess I am quite content with being called an ethnic anti-fascist and foreign citizen, though resident here in Vilnius for much of the past thirteen years and treated splendidly by the city’s terrific residents.]

So what is in store next Sunday, March 11th?

Hopefully peaceful and noble citizens of Vilnius, not to mention those involved with human rights organizations, will join us this time, en masse, before 1 PM (not hours later when it is all over and done with), at Cathedral Square next Sunday March 11th, to follow in silence and indignation the shameful show of glorification of fascism that proceeds once again, as in Kaunas, with active support from members of parliament who have been involved with the ruling coalition at various points in time.

“Hopefully peaceful and noble citizens of Vilnius, not to mention those involved with human rights organizations, will join us this time, en masse, before 1 PM (not hours later when it is all over and done with), at Cathedral Square next Sunday March 11th.”

No doubt, we will see there in a spirit of solidarity the leaders of such organizations as the Center for the Study of East European Jewry, the International Commission for the Evaluation of the Crimes of the Nazi and Soviet Occupation Regimes in Lithuania, the Jewish Culture and Information Center, the Jewish Public Library, the Kabbalah Center, the Maceva board of directors, SLS, the Tolerance Center, Vilnius International House, VilNews, the Vilnius Yiddish Institute, and all the others so concerned with the tragic culture and legacy of the Jews of Lithuania. They, the heads of the human rights centers in town, and Christian leaders (especially from the pro-tolerance Bernardinai Church) will not wish to head for the hills on a day like this. They will not wish to get off the hook with some lame statement in the spirit of Mr. Zingeris’s last week.

It was tempting, but would have seemed churlish, to include in the preceding paragraph the leadership of the state-sponsored Genocide Research Center (or its derivative Genocide Museum) which should have some sensitivity toward the victims of genocide in Lithuania (some 95% of Lithuanian Jewry). After all, one of its own officials is an official organizer of next week’s neo-Nazi march in the heart of the Lithuanian capital. On the march’s dedicated website, the chairman of the Lithuanian National Center cordially invites one and all to join the neo-Nazis (the authorities have this year issued a permit for two thousand participants). The invitation includes his assurance that the event is also a “challenge to all globalists and cosmopolites of the world which seek to destroy nations, national cultures” etc. The author of this invitation to the neo-Nazi march continues to be listed on the Genocide Center’s website as “chief specialist” of the “Special Investigations Division.” Is this the man investigating suspected commiters of genocide? Note that he is listed as on “parental leave” which seems to leave more time for organizing neo-Nazi marches.

So let us meet Sunday next and celebrate the intercultural respect, tolerance and welcoming spirit to all that were the hallmark of the Grand Duchy of Lithuania, to which many of us feel proud to trace our roots.

One of the most precious documents of the Grand Duchy, the charter of Grand Duke Vytautas (Witold) for the rights of the Jews of Grodno, calls on members of the safe majority, by law, to rise up in defense of a minority-member neighbor who might be the victim of a hate-based attack.

But some meaningful history can still be made before March 11th 2012. People around the world can continue to sign the inspirational petition initiated by Olga Zabludoff in Washington DC, proudly signed by many proud Lithuanian citizens.

Moreover, the president or prime minister can just find the courage to say:

“As long as I am in office, there will be no Nazi marches in the center of our magnificent capital on our cherished independence day. Period.”