REVIEW OF KEEP ME IN MIND

The entire presentation is very well done and tasteful and everyone involved in the project seemed perfectly able to play their parts in English or Lithuanian. The two initiators of the project, Christina Friedrich and Michael Brauchli, were there when we visited, greeting visitors and answering any questions. In a word, they were very involved, and the austerity of the presentation―plain sheets of paper with handwriting on them, a few objects the survivors lent to the project to illustrate different portions of their biographies―forced visitors, who were really listeners, to focus instead on the narrative, for lack of stimulus. 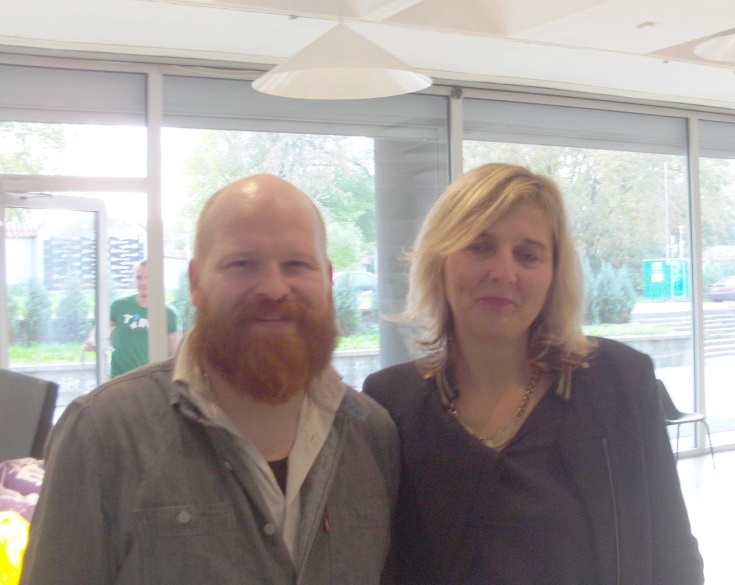 When we attended and according to earlier attendees, the room with five or six tables, each with five or six chairs, was filled with visitors listening intently. This is somewhat unusual in Lithuania, where Holocaust projects of this sort often go unseen.

I came with a Holocaust survivor who asked a number of questions of the narrator whom she knew personally. There appeared to be a back-and-forth going on at other tables where presumably ethnically Lithuanian young people were engaging their narrators on the facts in the specific case under discussion.

It all looked like a Holocaust educator’s dream come true, except, there was a problem. Not, most likely, due to any flaw or oversight on the part of the project organizers. Everything was professional, smooth, dare I say even Germanic in its precision. In fact it was too smooth. It reminded me, almost, of some reality television show I saw once where contestants were invited to “speed-date” at separate tables, sizing up potential partners in a matter of minutes and then moving on the next. Not that the Keep Me in Mind project was tacky in that way at all, or even distasteful in any obvious way. No, the problem was one of… context. 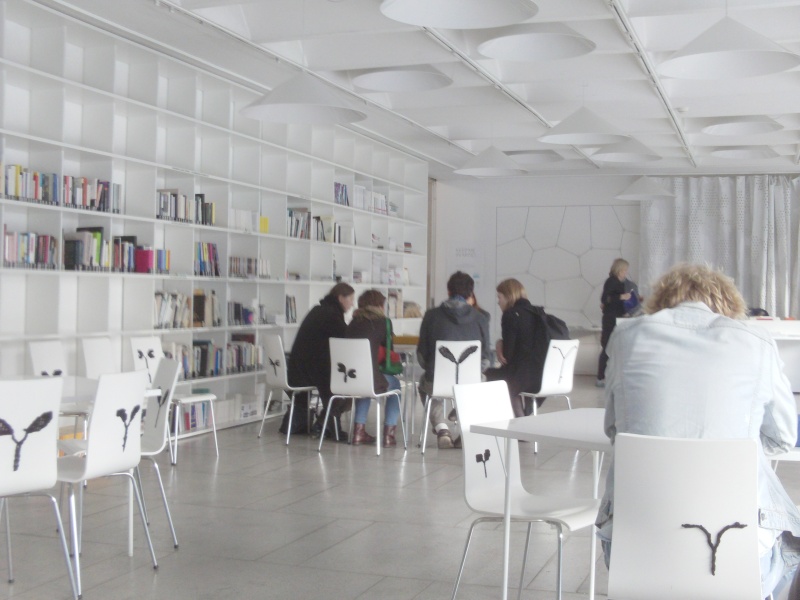 The performance in Vilnius 15 minutes in. All tables were full with people waiting for a free spot by the time we left.

Yes, it is a positive thing to have survived the Holocaust, and yes, the survivors’ stories are surely important, but the vast majority of Holocaust victims, at least in this part of the world, didn’t survive to tell their stories. But the problem with the performance piece wasn’t merely a rhetorical “who speaks for the dead” conundrum no one can ever answer definitively. It was, again, a problem of context.

While it might serve Holocaust education to have emotionally engaging performance art/readings of this sort―and it certainly did appear strangely popular―there is a danger that the Holocaust in Lithuania becomes a tear-jerker, a sad film one watches until one is satiated, and then leaves the cinema, whereas the facts themselves speak much more eloquently and emotionally than the pre-digested catharsis so-called Lithuanian Holocaust educators like to serve up, ghost stories around the national campfire which end on a happy and humanistic, encouraging note. We saw this recently in the blind rage and character assassination the International Commission for the Evaluation of the Crimes of the Nazi and Soviet Occupational Regimes in Lithuania (a permanently state-funded Lithuanian Commission pretending to internationality, incidentally) waged against the Holocaust survivor Pinchos Fridberg for his daring question the facts in a tear-jerker served up by the Commission’s top Holocaust educator at a supposedly international forum held in the Lithuanian parliament. This was only one instance of the attempt by self-styled “Holocaust educators” in Lithuania to “fix the Holocaust,” to keep up with the Joneses in the West by having an emotionally safe and even uplifting Holocaust story which doesn’t do anything to redress the wrongs―mass murder and theft―and the facts be damned, the survivors can go to hell if they don’t appreciate all that we’re doing for them here, and they probably aren’t really survivors or even Jews anyway.

The attempt to create a charming, enchanting, enthralling Lithuanian Holocaust story is part of the continuing attempt to hide the real story, on-going since 1941, an unpleasant story where ethnic Lithuanians acting in the name of the Lithuanian state took the initiative and led the way, showing Hitler that not only was the Final Solution to the Jewish Problem in Europe feasible, it had massive public support, at least in some corners of the continent. This feel-good response to the black hole singularity in history called Holocaust will never talk about Lithuanian volunteers from all walks of life bashing the heads of Jewish infants against rocks and trees in order to save ammunition. It prefers to dwell upon poignant and anecdotal tales of rescuers set against the backdrop of the Nazi war machine. Not that there is a correct emotional response to the Holocaust; if there is, I don’t know it, and don’t presume to tell anyone what they should feel about it, but I do agree with the maligned Vilnius-born and Vilnius-residing Lithuanian Jew, retired physics professor Pinchos Fridberg who says that at a bare minimum we must get the facts straight, and I do believe the facts speak for themselves much more eloquently than shmaltzy grandmother “church ladies” deployed as mind control agents to shape public perceptions, even if the state-sponsored Commission seems to have pulled one over even upon some at Yad Vashem, and any number of American Jews willing to be wined and dined at Lithuanian taxpayer expense.

Does Keep Me in Mind serve as a gentle urging, pulling at the heart-strings of Lithuanians, compelling a deeper consideration of the historical events in the Lithuanian Holocaust? Unfortunately it cannot serve as a first step, because there have been a multitude of these gentle projects to quietly win over hearts and minds in the last twenty years in Lithuania, to no avail. There is no gentle way to talk about the Holocaust in Lithuania, there is the raw confrontation only of pick-axe and crow bar against flesh and bone, because that’s what happened here. A reversion to the worst in mankind. Asking how it happened is fine, so long as we all know what “it” is. But Lithuanians don’t know, both because of willful ignorance, and because of “Lithuanian activism” designed to hide the truth.

Why, for example, does this so-called International Commission not include real Holocaust educators from Lithuania, the people who have been teaching the Holocaust and writing and publishing books on the subject for decades? They don’t fit in with the Commission’s agenda because they tend to tell the truth.

Christina Friedrich and Michael Brauchli’s project is fine, but in the context of Lithuania―where knowledge of the Holocaust is still practically nil and where close to 100% of the Jewish population didn’t survive to tell their stories―it cannot serve as any sort of fair introduction to the public, although that probably isn’t really the intent of its creators. According to Rima Kazlauskaitė, who provided the narrative of Benjamin Ginzburg to us very professionally, the performance has been staged in Haifa and Berlin as well. In other words, although the intended audience isn’t exclusively Lithuanians, it is fully susceptible to being utilized by the forces of Lithuanian Holocaust obfuscation to further their agenda of creating a lop-sided narrative, one that only includes survivor testimonies when it serves the purpose of mitigation, and excluding all such testimonies as merely anecdotal and ahistorical when they recount how, for example, Lithuanians began murdering Jews before German troops arrived at dozens of locations throughout Lithuania.

As a semi-random cross-section of survivors living in Haifa, the performance piece is great. As an introduction for Lithuanians to learn about the Holocaust, the unique role Lithuania played in the Holocaust, it fails miserably―and the lone survivor from Vilna, Benjamin Ginzburg, spent the war in the Netherlands. As art, it says something about externalized memory a la McLuhan, about the present-day computerized paradigm of plug-and-play memory devices and surely a lot more I was not able to glean during one brief visit. Just as McLuhan predicted, the externalization of mental faculties into media devices weakens the mental muscles, which is why, of course, kids can’t spell anymore, and I suspect the same holds true for modular plug-and-play survivor testimonies delivered by people thrice and four times removed, but the main problem was a failure to introduce the context properly in Vilnius, which of course has its own unique and completely ignored Holocaust history, unknown and even taboo to the current Lithuanianized post-World War II population of the city.