Posted on 11 April 2018 by Defending History

Our national Ministry for Jewish Control’s website editors were recently faced with a daunting quagmire. An article in the New York Times (one written, to make matters worse, by a Pulitzer Prize winning journalist), had featured, right on top, a large beautiful photo of a handsome young Lithuanian Jewish man, Simon Gurevich, who was elected head of the Vilnius Jewish Community by an overwhelming majority, one year ago. Even worse, he is of pure Litvak heritage going back seven hundred years on all sides of his family. Shockingly, the article quoted him as saying that the government might find a better place for its new national convention center than on top of the old Vilna Jewish cemetery. (Obviously he was misled by those 42,500 people who signed some petition or other.  By the way, a few years ago I helped the Commissariat in its search at the time for a suitable new rabbi with that question in mind.)

Who’s afraid of Simon Gurevich and The New York Times?

Naturally, all those local Jews who voted for Mr. Gurevich are Russians who claim to be Jewish, as the Commissariat demonstrated brilliantly last May beyond any shadow of a doubt. The challenge became to ensure that readers from the lands of the capitalist leaches, those who speak English, never find out about this article. Easy enough, who will ever hear about a New York Times article about our distant country? Mum’s the word.

But just when the New York Times article was beginning to fade, the  Lithuanian newspaper Lietuvos žinios featured an article giving voice to our country’s grand diplomatic genius, its ambassador to the State of Israel. In the article, the ambassador talks like a true diplomat, gentleman, scholar, and intellectual with a love of free discourse and amicable exchange of ideas in an atmosphere of mutual respect. Moreover, he made clear he’d now be setting things straight. Silence no more! Much of the article is about Ruta Vanagaite’s book on the Lithuanian Holocaust written with the American-Israeli Nazi hunter Efraim Zuroff. But in the Lietuvos žinios article’s first paragraph, his excellency the ambassador lashes out at “Zuroff” and “Katz” before going on a long rampage demonstrating that the points made in the New York Times article and others are Fake News, all the while adding tons more publicity for Ms. Vanagaite’s current book-selling tour. Hopefully his embassy will get a cut of the extra royalties his attentions will have generated. Isn’t that what happened a few months ago in America when our country’s ambassador to that land informed a Washington DC symposium that Ms. Vanagaite was, like all those folks who mention the Holocaust, a Russian agent?

But as always, the Jewish Commissariat’s English Language Information Department is quick to find a brilliant solution. They would translate just the first paragraph of the Lietuvos zinios article into English, and put a note about the rest in Lithuanian (nobody will even follow the link; after all, mention of the name of the Lithuanian language scares off those guys really good). They would however have to add in square brackets “Efraim” and “Dovid” to make sure readers do not somehow get the misimpression that this is all about those other two scoundrels who also come and disturb the ambassador’s peace at his Tel Aviv residence every morning, Efraim Katz and Dovid Zuroff.

But the forces of evil always put some kind of stumbling block before the best laid plans. The last sentence of the paragraph to be translated  refers to the New York Times by name, and even gives a link to the cursed article. What to do?

That was when the Jewish Commissariat’s crack team of English information control experts quickly hit on their brilliant solution. Instead of translating “The New York Times ran an article on March 30th etc.” they would translate: “An American newspaper ran an article on March 30th accusing Lithuania of trying to hide the Holocaust” without any hint about the paper or links. Must be the Peacockville Weekly Chirper or maybe the Smalltown Thriceweekly Shouter. Naturally, readers are idiots. Nobody will ever figure it out.

Whew, that was a close one.

And so, all’s well that ends well. It’s made certain that readers who follows the Commissariat’s English language section will never hear the words “Simon Gurevich” or “Vilnius Jewish Community” or “New York Times.” Those local Jews are all Russians anyway, unlike the pure Litvak leaders at the Commissariat, with Geoffrey, Indre, Martynas, Monika, Jurga, and Renaldas at the very helm of Litvak life and the Litvak soul and spirit. Their every waking breath is dedicated to preservation of the authentic, free and truly Jewish life of the Jewish (Litvak-Litvak-Litvak) Community of Lithuania, and its language, literature, and culture. Their top salaries all come from the Good Will Foundation’s disbursement of the blood money of the religious properties of the annihilated Jews of Lithuania; that’s why they all make it a matter of principle to donate 1% of those salaries to poor Jewish people. These are people with a Jewish heart and a Litvak soul: a yídishe harts un a yídishe neshóme. Just come and visit during office hours and ask for me, Motke. Motke, you know, has been following stuff in Vilna for quite some time now. 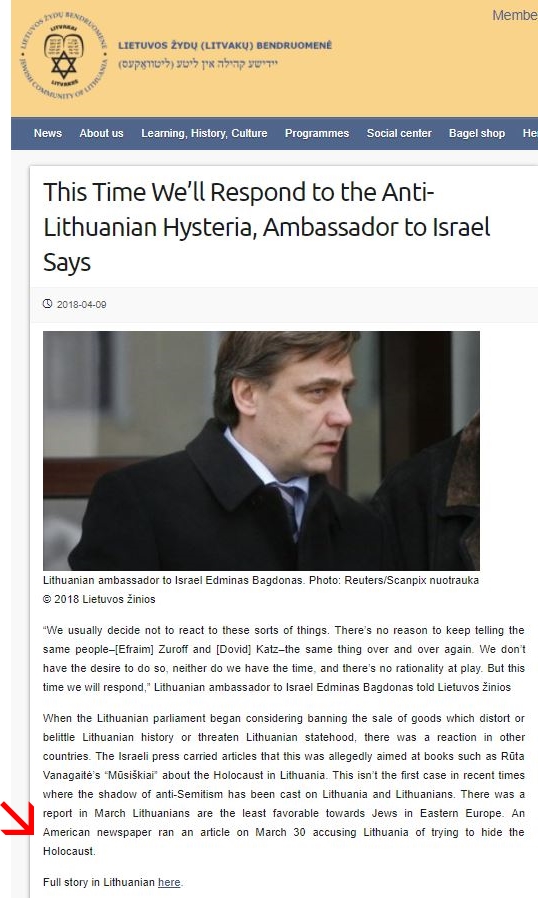