The Association of Lithuanian Jews in Israel, one of the world’s last active organizations of Holocaust survivors from Lithuania, today released to the media (by fax) its letter of protest to the executive director of the Yivo Institute for Jewish Research concerning Yivo’s recent decision to have the Lithuanian foreign minister as ‘guest of honor’ at its 22 September event to commemorate the Vilna Ghetto. The association’s letter notes that its members are ‘nearly all Holocaust survivors ourselves’.

The letter is signed by the association’s elected chairman, Tel Aviv attorney Joseph Melamed. He is a Kovno ghetto survivor, veteran of the anti-Nazi partisan resistance in the forests of Lithuania and hero of Israel’s War of Independence. He is also a retired Israeli diplomat.

The association’s letter expresses ‘dismay and disappointment at the decision of Yivo in New York to invite the Lithuanian Foreign Minister as Guest of Honor’.

“We call on Yivo to abandon these moral capitulations, and to be true to its founders and its soul […]”

The letter notes the association’s thinking with regard to Yivo’s decision. ‘Not only did he [the foreign minister] never apologize for his antisemitic outbursts of 2010, he has failed to do anything concerning the growth of official state-supported antisemitism in Lithuania, from Nazi marches to the legalization of swastikas. The ongoing distortion and trivialization of the Holocaust, and attempts to cover for these issues with prestigious Jewish partnerships abroad are an unacceptable game.’

The letter concludes with the following counsel for Yivo’s leadership:

‘We call on Yivo to abandon these moral capitulations, and to be true to its founders and its soul, and cancel the invitation to the Lithuanian foreign minister.’

An image of the letter, released today (by fax), follows. It is available here as PDF. 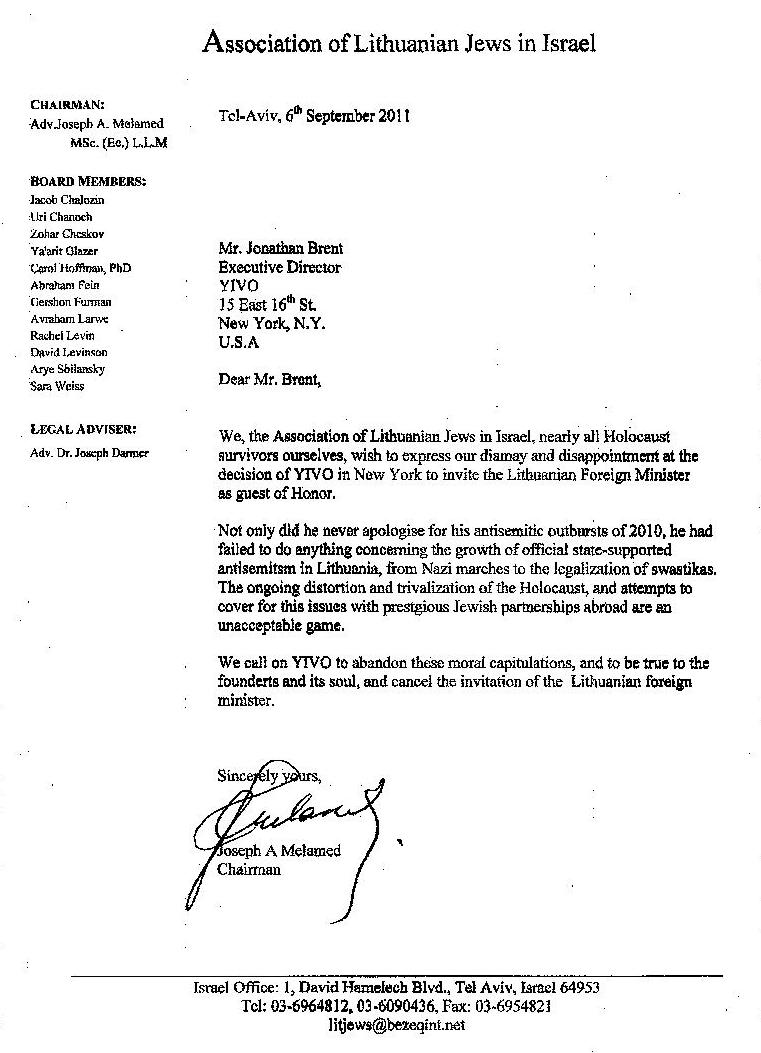