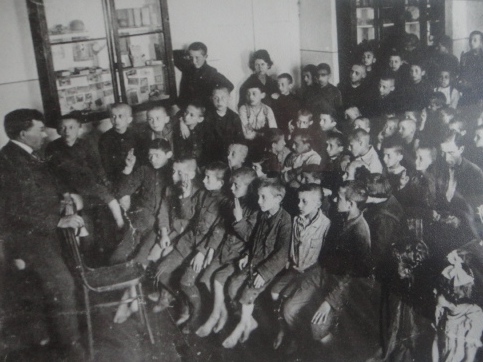 Henke was the Yiddish childhood name in our little Duksht of the man who later became a famous French radical politician. In France he called himself Charles Rappaport. But this is not about the real Rappaport because no one in the shtetl had any idea what happened to Henke after the 1887 attempt on Tsar Alexander III. By the time I was born in 1888, Henke had already escaped. And no one really knew what his role was, or dared speak about it openly.

He came from a prominent family. It was said that in the 1860s, his father, an enterprising and prosperous Jewish contractor, built the Duksht train station of the St. Petersburg –Warsaw railway. The town grew up around it. He built himself a house nearby, the town’s first house. He was a learned Jew and a devoted follower of the venerated Hasidic Rabbi of Kopust (today Kopyś in Belarus). When Henke reached the age of twelve, his father sent him to study in the yeshiva in Vidz, about a day’s journey from Duksht. Soon all the neighboring towns talked about Henke’s prowess as a student.

After a couple of years he went on to a higher Vidz yeshiva. But soon afterward, like so many others at the time, Henke started to read the secular Hebrew tracts of the Haskalah movement that first opened a window on the wider world for young Jews. Fourteen-year-old Henke left the Hasidic yeshiva in Vidz and ran off to Vilne—several days journey if you couldn’t afford the train—to fulfill his thirst for education and for knowledge of the world. In a strange way enrolling in one of the top yeshivas in Vilne, a thriving center of highly intellectual Jewish learning, the opposite of Hasidic spirituality, was a natural step toward the secular world. Vilne was of course the Yiddish name for the city the Russians called Vilna, the Poles Wilno, the Lithuanians Vilnius. Napoleon called it “the Jerusalem of the North.” There, one thing led to another for Henke, which became the stuff of his legend.

When I was growing up our town was full of mysterious stories about Henke’s part in the failed assassination of the Tsar—each more fantastic than the other. The old Jews, the town’s first inhabitants, the only ones who actually remembered Henke, kept the stories alive and elaborated them in whispers. In those times it was dangerous to speak openly about the attempt on the Tsar, and people were afraid to speak Henke’s name. If an old Jew sometime between afternoon and evening prayers blurted out the name Henke in a hushed conversation in a corner of the synagogue, the others would immediately look around to make sure no stranger was listening. Of course, the more mysterious and secret they were, the more the stories about Henke provoked our youthful fantasies and our curiosity.

We formed a boys’ conspiracy to talk about him, not in town, of course, but far off on a hill near the forest, from which you could see the whole region around the town, and you could be sure no one was listening to your conversation. What a guy, we thought. After all, with a couple of pals he tried to kill the Tsar!

Still, we were puzzled about how Henke could have gotten close enough to the Tsar to try to kill him. We knew that when the Tsar’s special train was to ride through Duksht on the St. Petersburg-Warsaw line, a troop of soldiers led by a colonel, and sometimes even a general, would arrive weeks in advance to guard both sides of the rail line day and night. That’s the way it was done along the entire line to Russia’s western border. For a day before the Tsar was to ride by, no one could leave or enter the houses on the town square whose windows faced the train tracks. And no one was permitted to look out the windows facing the train. People said the soldiers had orders to shoot anyone who disobeyed these instructions.

So how could Henke have gotten close enough to the Tsar? And why did Henke want to kill the Tsar? It was rumored in the synagogue that Henke had been caught and clapped in chains and confined in a remote underground prison where he was perpetually in darkness. Rats as big as cats wandered around this prison and would throw themselves on Henke to snatch his ration of dry bread, the only food he got. It took all his strength to fight them off.

It was this story about rats that made the strongest impression on us, and we shuddered every time we repeated it. We experienced with Henke his fearful struggle with the rats. We pictured him looking like his brother Haim-Moishe, who still lived in town, a short, hairy man with a drawn face and burning eyes, fighting desperately to keep his bread from the rats.

Henokh the Old One, the oldest Jew in town, used to describe how in his dark prison Henke constantly recited passages of Talmud. He didn’t of course have any books, so he had to recite the Talmudic passages from memory. Moishe-Yankel the blacksmith said that it was because of Henke’s imprisonment that his father died. The authorities canceled his father’s contracts, after which he was just another poor Jew. Henke’s mother, a clever woman, opened a tavern, but the peasants were afraid to come inside because the police were constantly coming around to question Henke’s father. They threatened to deport him to an unmentioned “far off” place, which of course meant Siberia. There was even a rumor that they would send the other Jews in town that had known Henke to Siberia, too.

Another Henke story went like this: the Tsar, who barely escaped death, ordered the hanging of the men who wanted to kill him. As they led Henke to the gallows in chains, he tore loose from the police guard and, with the help of his comrades, disappeared. Our hearts were lighter when we heard this version. But where is he now? He is now in a land, it was said, “where it is like America,” where there is no Tsar and no need to be afraid of anyone. In this country—which was never named—he is a great man. He deals there with great affairs, and even with ministers. What a guy, Henke! We thought that had he not run afoul of the law he would certainly have become some kind of famous man of learning, which in our way of thinking was the ultimate attainment.

In our eyes Henke was a great hero, whom neither the Tsar nor the giant rats could defeat, and he was our secret ideal. Every one of us wanted to find out more about the secular tracts that Henke had read surreptitiously in the yeshiva, the ones that caused him to leave for Vilne. But the main thing that lit the flame of our youthful fantasies was the description of the group of comrades with whom he made common cause in the attempt on the Tsar. It was rumored they were everywhere, even in the Tsar’s court, but no one knew who they were.

We heard that these comrades were good to the poor, and that among them everyone was equal, Jews and non-Jews. We liked that last part the best. We believed one could learn about all this in Vilne, where there were a lot of these comrades. Every one of us dreamed about going there to study in a yeshiva, as the first step to the greater world.

We concluded secretly that if Henke was opposed to the Tsar, then we were opposed to him, too, and even to the lowly town policeman who represented the Tsar, and that we had to act on our beliefs. Two boys from our conspiratorial group ran off to Vilne to study in a yeshiva and learn Russian. You had to go to Vilne to study Russian because in Duksht the Jews spoke Yiddish, and the surrounding peasants spoke Lithuanian or Polish. For us Russian was the real key to the outer world.

And soon I decided to go to Vilne, too. Despite her trepidation about the youngest of her ten surviving children, my mother agreed. She had great hopes for her 12-year-old Fayvke. Still, she worried incessantly about how I would feed myself, and where I would sleep, and who would prepare a clean shirt for me to wear. My own determination to go was so great that it didn’t occur to me to think about any of this. And so, intoxicated by Henke’s example, I went off to Vilne. Actually, it felt as if I was flying, propelled by that same thirst for knowledge.