Posted on 12 March 2020 by Defending History 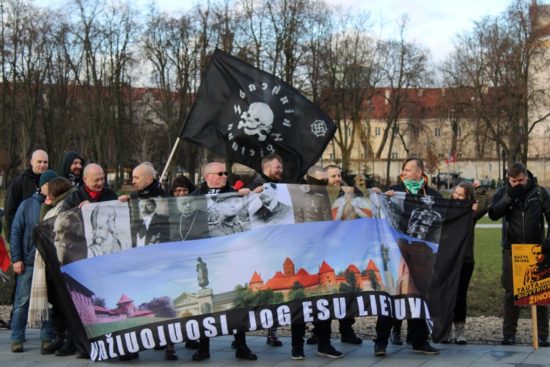 The Totenkopf flag, with the “Lithuanian swastika” upper right, has featured each year. Swastikas were legalized by Lithuanian courts in 2010. Photo: Julius Norwilla.

VILNIUS—It was Wednesday March 11th at around 4 PM. The procession of the “nationalists” began, as usual,  in the heart of the Lithuanian capital, with authorities’ permission, at the city’s medieval Cathedral Square. It made its way up the central boulevard, Gedimino, up to Lukiškės Square, a stone’s throw from the nation’s Seimas, or parliament.

Only Defending History came out to monitor the march. . .

A few prominently visible participants in the march carried portraits of Nazi collaborators Jonas Noreika and Kazys Škirpa. Posters included the texts (here in English translation): “Lithuania is great again”; “‘The state was and will be created by the Lithuanian nation’ — Romualdas Ozolas’”. 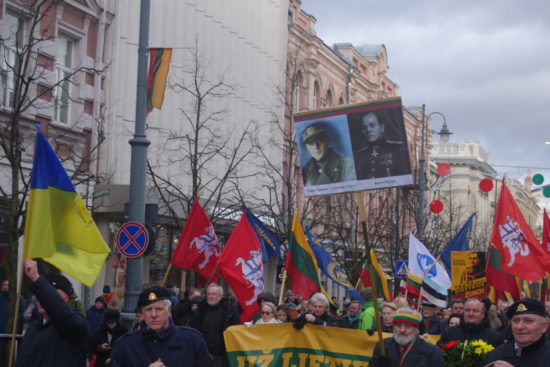 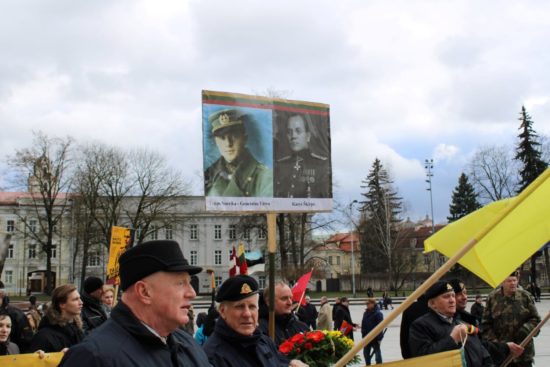 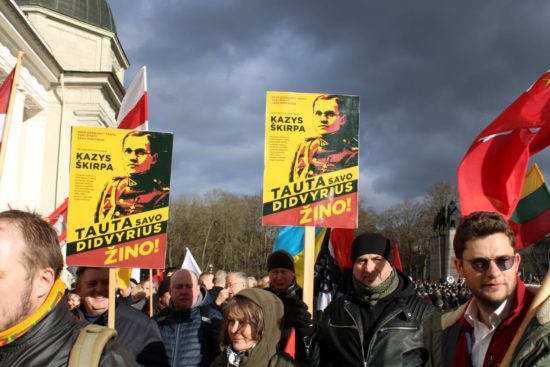 Individually, participants of the march wore or carried various ultranationalist or neo-Nazi symbols including the swastika. 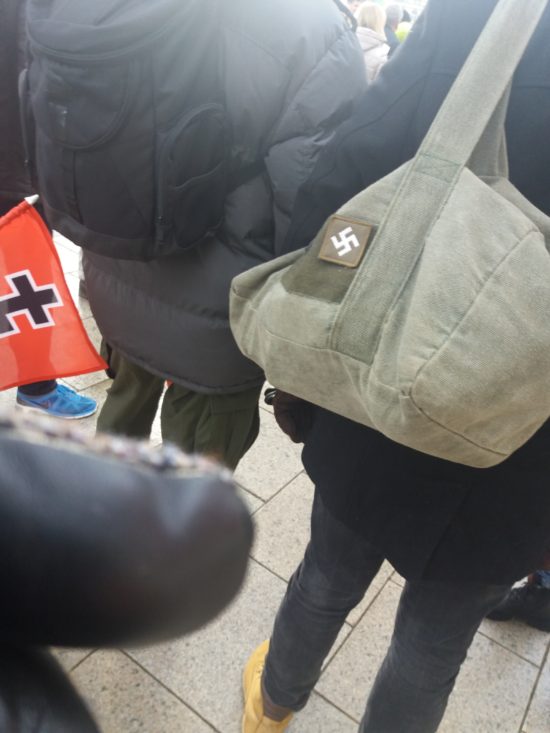 In addition to the Lithuanian tricolor, participants of the national march also bore Latvian, German and Ukrainian national flags. In addition, there were Ukrainian nationalists with black and red flags. The procession started and the participants chanted rounds of both the more neutral “Lietuva!” (‘Lithuania’) and the effectively racist, ethno-exclusionary “Lietuva — Lietuvams!” (‘Lithuania for Lithuanians’).

About 500 people attended the start of the march. Naglis Puteikis participated in the procession.

There was one poster from an entirely different context, with the captions “In Temporary Captivity 1971 — 2008: The Sports Palace” and “Liberty for the  Eternal 15th Century Jewish Cemetery”; this effectively pro-Jewish poster, carried by campaigner for the cemetery’s restoration and Defending History contributor Dr. Andrius Kulikauskas, who edits a website in Lithuanian, also featured photographs of the  constituent assembly of the Lithuanian Reform Movement and some tombstones of the old Piramónt Jewish cemetery in Vilnius.

Following the procession, a rally took place in Lukiškės Square. The keynote speaker, Gintaras Songaila explained that Lithuania is a country based on Lithuanian ethnicity, claiming that this notion lay at the heart of the popular freedom movement of 1989 and the Act of Restoration of March 11, 1990. The main challenge at present, he contended, the threat to the survival of the Lithuanian nation and the state. he referred to the “shame” accruing to Lithuania and the nation from having joined in with harmonization of legislation in accordance with EU membership.

Other speakers identified their own ideas on the identities of today’s enemies of the nation. The roster included  foreign minister Linas Linkevičius, Seimas member Emanuel Zingeris, chairperson of the Lithuanian Jewish Community Faina Kukliansky, and the mayor of Vilnius, Remigijus Šimašius.

In his own speech, the visiting adviser to the Alternative for Germany (AfD) party, emphasized that the current European Union is exactly the same as the Soviet Union, from which the peoples of Europe must be liberated. Ethnicity, he claimed, must be at the heart of the EU. This is something to fight for. The fight will be difficult as patriots are persecuted in Europe. In Germany, AfD is the last (and most important) bastion of this fight, he contended. The slogan from Ukraine was endorsed with the slogans “Slava hierojam” (‘Glory to the Heroes’) and  “Slava natzii” (‘Glory to the Ethnic Nation’).