But the statement does not mention its opinion about the Estonian Waffen SS, whose record and commemoration ceremonies have been the focus of debates in recent years.

And it does go on to declare that “the decision of the government to honor the struggle for the restoration of Estonian independence is a natural and unequivocal choice.”

The statement thereby fails to clarify whether in the Defense Ministry’s judgment, the Estonian Waffen SS count as a Nazi collaborationist organization or as participants in “the struggle for the restoration of Estonian independence.”  Historians are generally united in the view that had the Nazis won the war, there would have been no Estonia left to become independent in 1991.

A UK dimension to the imbroglio concerns a report in the 3 January 2012 edition of the Daily Mail which was subsequently pulled from the paper’s Mail Online website (but is still widely available on various websites). Various theories are circulating as to why the article was deleted from the Mail Online, none yet confirmed by the Mail itself. The 3 January print-edition article was shorter. 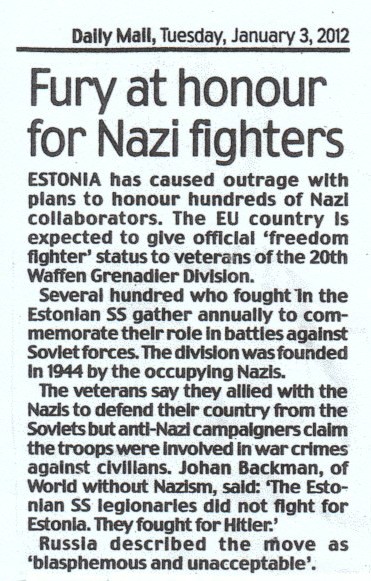 The web-version article, which cited Russian and close-to-Russia commentators, but no Western or Jewish human rights advocates, claimed that Estonian defense minister Mart Laar, a former prime minister, is spearheading the campaign to honor the country’s Waffen SS.

Estonian events to honor the Nazi-organized and supervised Waffen SS, to “celebrate” Hitler’s invasion, and to confound perpetrators and victims within the region’s resurgent “red-brown theology” have resurfaced regularly in recent years (e.g. July 2010, Dec 2010, May 2011,  July 2011).

But in the final months of 2010, there was diplomatic buzz about an apparently temporary change of national posture, when the Estonian ambassador in Vilnius signed a strong letter condemning antisemitism and “Double Genocide” spearheaded by then British ambassador to Lithuania Simon J. Butt. The buzz was reinforced when Estonia failed to attend a red-brown conference aimed at pressuring the European Union to insert Double Genocide language into the “Stockholm Programme”: it was not known whether the blizzard cited as the reason for the no-show was more diplomatic than meteorological. The “Stockholm Programme” insertion failed and ended up being the first major EU setback for the East European nationalist camp’s campaign to have World War II history revised as a matter of European Union policy.

But the recent pattern indicates to some a reversion to nationalist East European historical revisionism that occasionally includes the glorification of Nazi collaborators.