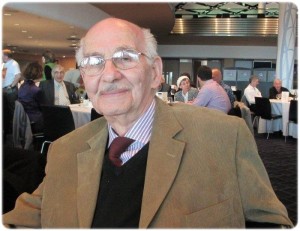 In 2012, on the eve of his ninetieth birthday, he led a peaceful, dignified, friendly picket-line outside the Lithuanian Embassy in London and handed the consul a petition.

He is pictured above at the prime minister’s Holocaust Commission consultation event held in London on 5 May 2014.