MONROE, NEW YORK—Ignoring the unanimous views of the world’s leading rabbinic authorities in opposition to the project to plonk a 34 million euro convention center in the heart of Vilna’s old Jewish cemetery, surrounded by thousands of graves on all four sides, “Admas Kodesh,” the American Satmar (Aaronites) affiliate of the London-based CPJCE issued a tweet today condemning as “evil people trying to undermine progress” the 34,000 people, including the chief rabbi of Lithuania, who signed Vilnius resident Ruta Bloshtein’s petition calling on the Lithuanian government to find an alternative venue for the convention center.

They did not explain what is “evil” about leaving thousands of Jewish graves in Vilna undisturbed and moving the convention center elsewhere. Nor did they mention the evidence  in Wikileaks (reported in the Jerusalem Post, Times of Israel, DH) that these “pious people” (the CPJCE in London) receive large amounts of money for “supervision” once they effectively sell other people’s graves to property developers and coopted government officials in Eastern Europe. The tweet campaign follows Rabbi Herschel Gluck’s condemnation of the petition signers in the Jewish Chronicle yesterday. Screen shot of some of the tweets: 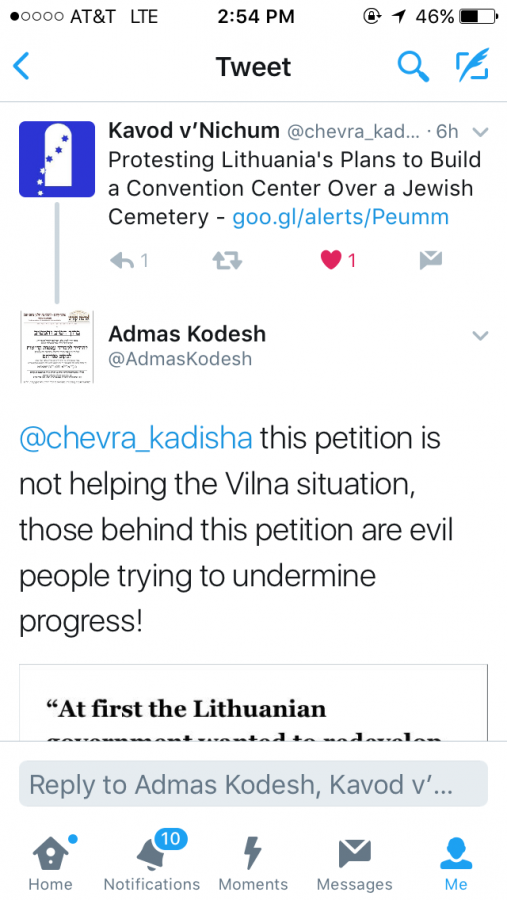