VILNIUS—Yet again, the far right organizations that choose to glorify their country’s Nazi and Holocaust collaborators, also choose to target the human rights monitors who come to document their events. Alas, the Vilnius-based human-rights organizations, like European and international Jewish organizations, again failed to monitor last week’s central-Vilnius event. The small Defending History team was the only one on hand last Sunday, February 16th, to monitor, and DH, as usual, reported on the march, after having reported on its planners’ vow to highlight three specific collaborators. Vilnius’s prestigious Old Town, from the Gates of Dawn to the foot of Castle Mount, was allocated by authorities to the marchers for their dusk-to-evening slot of the Independence Day public festivities.

The main speech at the final destination started with a reference to DH’s editor, and the group’s Facebook page features the following graphic. See also the far right’s many manipulated and photoshopped images of this journal’s editor. In response to a journalist’s inquiry, DH provided a statement asserting that “Clearly history will show us to have been among the true friends of Lithuania, a nation with so many inspiring heroes to admire over so many centuries, while these folks bring shame by glorifying those who collaborated with the Nazis to annihilate their own fellow citizens on the basis of ethnicity.” Each year, Defending History names its Person of the Year from among the Lithuanian rescuers of Jewish neighbors during the Holocaust. See those honored for 2018, 2019, and 2020. 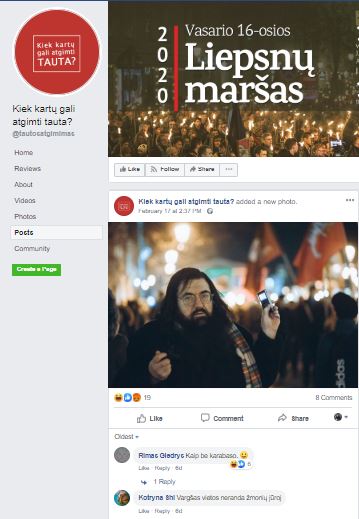