Antisemitism at the Aalst Carnival Parade in Belgium

Posted on 3 March 2020 by Defending History

Last month, on February 23, 2020, hundreds of individuals, associations and decorated wagons marched or rolled through the streets of the center of Aalst in what is known as their unique form of celebrating “Carnival,” mainly as a moment of self and free expression where and when king, royalties, clergy, politicians, film stars, VIPs, world events, are objects of satire, fun, criticism, be it with effigies, people dressed up or with placards of panels written in their nearly cryptic local dialect.

Aalst is a small, drab city in the Province of Eastern Flanders. The first time Aalst made world news was on the evening of November 9, 1985 when a mass killing by unknown semi-military killers ( “the Brabant Killers” in French and “de Bende van Nijvel” in Dutch) left eight people dead in the supermarket Delhaize, at the periphery of the city. It is a mass killing still under investigation nowadays by the Belgian Police authorities.

The second time that Aalst (pronounced Ooilsht in their specific Flemish dialect) became world news was on the Sunday before Mardi Gras on March 22, 2019, when among the different decorated wagons a specific one caught the attention of the press, and later, of Jewish associations. Effigies were seated on that wagon which bore wide brimmed black hats, and were fitted with sidecurls, crooked noses and sacks filled with money. It was the Aalst association “De Vismooil’n” who had created and displayed this gross caricature of “Der ewige Jude.” There was an immediate outcry by Belgian and international associations fighting against antisemitism, and by prominent Israeli and Jewish personalities. What made the problem and the debate more acute in 2019 was the fact that the Carnival Parade in Aalst had been put on the UNESCO’s World Heritage list as a cultural event.

To understand the background of this matter, it is necessary to go back in history and take in some basic facts about the history of this carnival event and the mentality associated with this public and family display of decorated wagons, individuals and groups or societies parading as do many other kindred associations in the world, among others in Brazil, New Orleans, the Portuguese ex-colonies, etc. Historically, the very first carnival in Aalst was in 1432. If you look at paintings of Brueghel, father or son, you will see many recurring themes of popular festivities with drinking, eating, gallivanting, clowns, musicians, buffoons and the like.

In modern times, the first time the idea of having the Carnival Parade in Aalst was put forward by City Counselor Lode De Smed was in January 1923. As far as the mentality of the participants and spectators of this annual Carnival Parade is concerned, you have to refer to a Flemish word “ketterij” (‘heretism’) which characterizes a typical fronde rebellion spirit, not only against religion (the origin of the ketterij harks back to the oppression of the Cathars in Southern France in the 13th and 14th centuries) but also against mores, politicians, commercial companies, world events, and various individuals. Also, there is in that specific Aalst Carnival a strong element of anarchy. 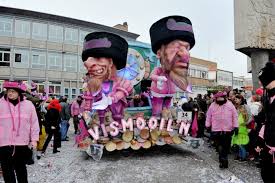 In Aalst, the motto, was, is and will always be that one can criticize, laugh with everything possible, in the truest sense of the freedom of expression, as was the case with Charlie Hebdo in France. A few years ago, there had been a small group of three or four persons dressed in SS uniforms parading: a clear and political reference to the then Belgian Federal Secretary of State Theo Francken, who, at the start of his public mandate in the Belgian Federal government had been seen and photographed with a Flemish ex-Waffen SS man at the time of the latter’s birthday. After the formation of a federal government in Belgium in 2014 associating the Nieuwe Vlaamse Alliantie (N-VA in short, a Flemish center/center-right party) there had been in the Aalst Parade of 2015 a display of Zyklon B boxes, clearly an association with the fact that among the leaders of the N-VA some of their fathers or grandfathers had sided with the Nazis during the war, some of them having even been condemned by the Belgian state.

After the display of the decorated antisemitic wagon in March 2019, the UNESCO World Heritage Committee decided to investigate the case. It was necessary because the kind of effigies displayed by the “Vismooil’n” Association on March 22, 2019 were in fact similar to the basest caricatures that Nazi newspapers and criminals such as Hitler, Goebbels, Rosenberg, Himmler, Heydrich, Goering, tended to exhibit during the 1930s to gain support for their hateful views that the Jews were akin to parasites, rats, money-grabbing monsters and, henceforward, had to be eradicated. Aalst Mayor Christoph D’Haese, from the N-VA party (a party originating from the “Volksunie” and before that from the “Vlaamse Beweging”, that latter political movement known before and during the war for its wish of independence of Flanders and collaboration with the Nazis), tried desperately to offer the idea that this antisemitic decorated wagon was a manifestation of basic freedom of expression. But, in the end, he decided to “voluntarily” remove his Carnival Parade from the list of the UNESCO’S Cultural Heritage roster. I read recently that he reneged on meeting representatives of at least three Jewish associations to discuss this matter.

But, in the weeks before this year’s Carnival Parade, some disturbing news items have been published. It seems first that shops selling “Jewish” dresses and paraphernalia were out of stock; a fact that Joël Rubinfeld confirmed in a post. Israel’s Foreign Affairs’ Minister Israel Katz stated a few days before the 2020 Carnival Parade that “Belgium as a Western Democracy should be ashamed to allow such an vitriolic antisemitic display. I call upon the authorities there to condemn and ban this hateful parade in Aalst.”

On February 23, on the 12 o’clock radio news in Flemish, Mayor D’haese assured us first that the Carnival Parade would take place despite the heavy storm raging over Belgium and, furthermore, that the police and the Parquet (equivalent in Belgium to the district attorney’s office in the US) would be present should any decorated wagons or behavior hurt the sensitivity of groups of population.

Well, well. The “Aalstenaars” (inhabitants of Aalst) reverted to “ketterij” or their brand anarchism and false pride and — with a vengeance! 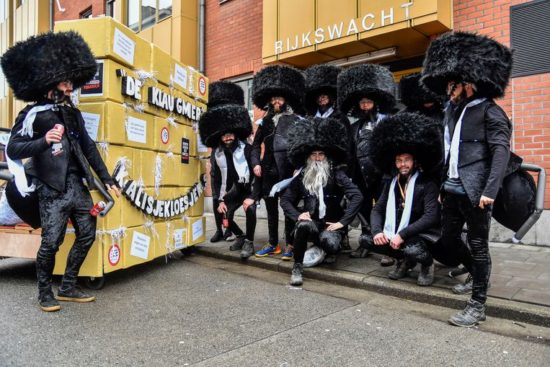 According to radio news reports live in Aalst at 4 PM and a news agency Belga report seen online, this year one could see spectators and participants of the parade displaying typical “Jewish” (or Hasidic) black hats and/or sidecurls. One could also see a decorated wagon displaying a “Wailing Wall” and when one of the members of the association was questioned about that matter on the radio he replied matter-of-factly that a “Wailing Wall was intended to wail, and that those who wished to wail, well, they had a place to wail now…” And let us understand from his tone of voice — the disdain — that it was clear that this was a clear answer to UNESCO, the Jews and the Israelis, who had “wailed” against their Carnival. Furthermore, the offending effigies of way back in 2019 (see the photo titled Aalst 2019) had made their return to the scene of their first apparition although in a more isolated and discreet form. Two other pictures from the February 23 Carnival Parade display some individuals proudly posing as supposedly Hasidic Jews. Joël Rubinfeld told a reporter of VRT News that he had counted five to six decorated wagons of a decidedly antisemitic nature. A Flemish reporter and spectator wrote later in “De Standaard” (a Flemish newspaper) that at least one third of the 150 groups displayed panels against or making fun of UNESCO.

Later in the evening of February 23, the office of PM Sophie Wilmès issued an official communiqué which stated that the caricatures seen during the Carnival Parade in Aalst were “harmful to our values and the reputation of our country.” On February 26, De Standaard quoted Mayor D’Haese announcing “Next year, I will still more intensively see to it that we can continue to display our right to free expression without hurting other population groups’ sensitivities.”

I am sorry, but as a Belgian citizen with cultural roots and parents in the Flemish part of the country (my maternal grandfather fought as a soldier in the trenches of Flanders during the First World War), as in the French-speaking part, as someone who wrote dozens of articles in English on the Holocaust, I think both these statements are farcical. They tend to whitewash local and governmental authorities of any blame in this matter. Of course, in Belgium there is no censorship and one can make fun of politicians, the clergy, well-known public figures, ministers, actors, etc. in public, in writing.

But here, in 2019 and again in 2020 the Aalstenaars made fun through dresses, hats, effigies, decorated wagons of – principally – the Hasidic community and by means of gross clichés. By means in fact of the same kinds of stereotypes that the Nazis used during their hate campaigns of the 1930s.

What happened in Aalst in March 2019 and on February 23, 2020 is not only antisemitism, it is purely copying in a disgusting manner what the Nazis did, with the same methods, tools and manners. It is racism at the basest, lowest and most primal level. And, it should be qualified as racism, as a harking back to Nazi times. Not as something (just) harmful to the reputation of our country. But as something repulsive, unworthy of Aalst, Flanders and Belgium. And, certainly, unworthy of the men and women in charge of our country, our cities, poor buffoons more concerned about their public image than about what is essentially a manifestation of hatred towards a part of our own population.