Posted on 21 October 2017 by Defending History 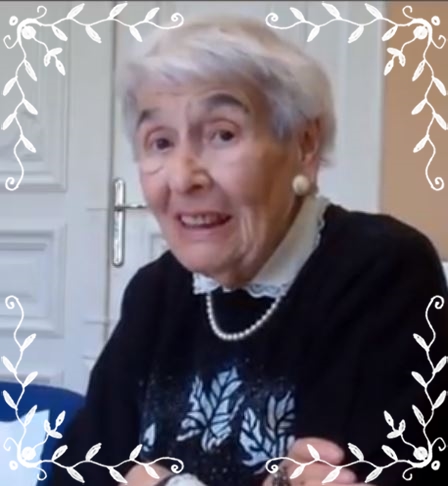 VILNIUS—At Sabbath services at Vilnius’s Choral Synagogue this morning, word began to spread that Vilnius’s oldest surviving veteran of the Jewish Partisans, Chasia (Khásye) Langbord Shpanerflig, had passed away at the age of 96.

Chasia, a beloved personality in Jewish Vilnius, was born in the shtetl Zhetl on 24 August 1921, into a family dedicated to modern Hebrew culture and Zionism Her father was a Hebrew teacher and her mother a paramedic in a hospital for poor children. Zhetl was then interwar Polish Republic Zdzięcioł, and is today Dziatlava (or Diatlava) in western Belarus; in Jewish culture it is forever deep in Líte (Jewish Lithuania) and in the Vilna area. After the well-known major fire calamity in Zhetl in 1933, her family sent her to Vilna (then Wilno) to study at the famed Tarbut Hebrew school on Zavalna Street. Today the building houses the official Jewish community at Pylimo 4. In numerous informal historic walks up and down the building, into her 90s, Chasia would cheerfully demonstrate how the children (against the wishes of their teachers and parents) would descend from one floor to another by sliding down the unusually wide banisters of the main stairwell, which have survived intact.

CHASIA ON VIDEO: At a 2011 session of the Vilna Yiddish Reading Circle.  Singing the partisan hymn with fellow partisan veteran Fania Yocheles Brantsovsky at the Vilnius Jewish cemetery.

Chasia and her family were incarcerated in the Vilna Ghetto by the Nazis and their local collaborators. Chasia was one of the only people ever to be sent to the ghetto prison (en route to certain murder at Ponár) and to be returned to the ghetto, an intricate tale of the underground Jewish resistance managing, on this rare occasion, to save one of their own for the battle against the Nazis.

In the September 1943 days preceding the ghetto’s final liquidation (on 23 Sept.), Chasia faced the excruciating choice of bidding farewell to her family forever and escaping to the forests to join up with the anti-Nazi Jewish partisans linked with the Soviet war effort in the World War II period of the Anglo-American-Soviet alliance against Hitler. It was a choice that she said haunted every single day of her life.

Chasia was immersed in both Vilna Hebrew and Vilna Yiddish culture, recalling the prewar competition with humor and recounting the lost Jewish life of the city’s vibrant Jewish life with humor, depth and unbounded love. Until her final illness, she was a stalwart participant in the weekly Vilna Yiddish Reading Circle, where she would often spar with those who had attended the city’s Yiddishist, non-Zionist, schools.

In Soviet times, Chasia worked in a shoe factory and started a second family in Vilnius. Her first had been wiped out in the Holocaust. After Lithuanian independence, she became active in the Jewish community, particularly in the Union of Former Ghetto Fighters, but unlike some of her comrade veterans, she shunned the limelight or any kind of heroization for her gallantry during the war. But in 2009, she was persuaded to become one of the prime speakers at the Summer Literary Seminars program, where her presentation left participants enthralled. At its conclusion, a history professor from America got up and said: “I have so many questions, but for today, I just want you to allow me to come up to you and kiss you.”

Chasis Langbord Shpanerflig was one of the most beloved personalities in modern Jewish Vilnius.