An Inalienable Right to be Schizophrenic? 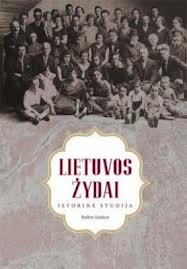 On Friday, September 13, 2013, the Baltos Lankos publishing firm in Vilnius held a discussion at their main book sales outlet in Vilnius to present a book edited by Professor Jurgita Verbickienė about the Jews of Lithuania.

The discussion on this doubly auspicious day—eve of Yom Kippur and Friday the 13th—began with Verbickienė presenting a short sketch of the book and two other participants in the discussion, Zigmas Vitkus and Simonas Gurevičius. The latter is the executive director of the Lithuanian Jewish Community. The topic was how Lithuanians view Jews.

The book is called “Lietuvos žydai. Istorinė studija,” or translated loosely into English, “Lithuanian Jews: An Historical Study.” Verbickienė was the editor and it is a collection of writings by various authors, including Samuel Barnai, Arūnas Bubnys, David E. Fishman, Ruth Leiserowitz, Larisa Lempertienė and Vladimir Levin. The publisher’s website lists this work as published in 2012, not 2013. The advertisement for the event did not say the book is new, only that it could be acquired at a lower cost at the event.

Verbickienė’s main talking point seemed to be modern expressions of the hatred of Jews in the comments section of internet news sites. Since she has made a career out of dancing around but never addressing the Holocaust in Lithuania, focusing instead on such urgent issues as to whether there was a gate or not for the mediaeval Jewish quarter in Vilna, there wasn’t a lot more to talk about.

Rather coincidentally, or perhaps not, witnesses at the event reported seeing ultra-nationalist internet commentator Zeppelinus, aka Lithuanian bureaucrat Linas Kadys, at the event. Kadys, as documented elsewhere on DefendingHistory.com, was exposed last year as yet another Lithuanian in government employ who makes a second career out of extremism. In fact, he complained to the Lithuanian Journalists’ Ethics Inspectorate about coverage of his “internet persona” on DH and in Lithuanian print and internet publications, while also complaining his privacy as a private person had been violated by the exposure and linkage to him of his rather public internet persona. In effect, Kadys has claimed the right to two public personae: one representing the Lithuanian state, and one representing the neo-Nazi and extreme xenophobic part of the Lithuanian population, while claiming both public personalities must never be linked, because that would violate his privacy.

Linas Kadys aka Zeppelinus was with tablet computer device at book presentation, held during normal working hours. Is it Lithuanian government bureaucrat Kadys or the extremist internet commentator Zeppelinus at this point in time? The answer may depend on the quality of his wi-fi signal.

Vitkus danced around the topic of modern antisemitism, saying that perhaps the virulence of the Lithuanian comments sections was worth studying further. Little more could be expected of an editor of the pseudo-Catholic bernardinai.lt internet site, which has wholly adopted the obfuscationist policy of assuming two mutually exclusive positions simultaneously, remembering the victims of the Holocaust and extolling Jewish culture while also commemorating Lithuanian Nazi leaders as national heroes.

The star was Simonas Gurevičius, who spoke simply and directly about what it means to be a Jew in Lithuania today. He talked about the public response to wearing a yarmulke in Vilna, about fears even today of placing the Shabbos candles in the window, and told about registering the birth of his child with Lithuanian authorities who, when it came time to record the newborn’s ethnicity, pleaded that the parents consider entering “Lithuanian” rather than “Jewish,” saying, “Why cripple the child from the beginning?” Gurevičius also spoke about the high number of Lithuanians who risked everything to save Jews during World War II, and what a shining example they set even today. Gurevičius basically said he was not willing to hide his Jewishness to make other Lithuanians feel somehow more comfortable, but at the same time said he saw Lithuanian Jews and Lithuanian Jewish history as an integral part of the Lithuanian population and history.

“Who here can name even one rescuer?” Gurevičius asked, then said “And who today, if you stopped them on the street, knows who Jascha Heifetz was?” This was on target, since the venue for the discussion was located at Maironio Street 3 in Vilnius, just down the street from Heifetz’s childhood home at Maironio 19 (formerly Safyannaya 3), right next to where the house of Israel Zaretsher Ginsberg stood. Gurevičius provided a whole list of Litvaks who are known throughout the world but not in Lithuania, including several recipients of the Noble Prize.

Also in attendance, besides Kadys and his internet personae, were Žilvinas Bielauskas of the Vilnius Jewish Public Library; Lithuanian Jewish survivor, historian and reconciliation activist Professor Irena Veisaitė; and former deputy director of the Vilna Gaon Jewish State Museum Rachel Kostanian, as well as a larger number of young people.