Mcmillan-Scott went on in 2009 to win election as a vice president of the European Parliament in his own right. His courage in standing against an alliance with the far-right, racist, antisemitic, homophobic and Holocaust distorting politics of the EU’s ‘Far East’ was echoed by Nick Clegg, head of the UK’s Liberals in one of the 2010 election campaign debates. Mcmillan-Scott had joined the Liberals after the Tories expelled him for disobeying orders when in fact they should have given him a medal for trying to rescue them from naive Western ignorance of an East European far right whose speciality is to pose as a moderate center-right.

For Europe’s future, it is perhaps most worrying that such far right ideas as Double Genocide, which typically comprises a tendency to minimize and make excuses for Hitler’s fascism and its allies in Europe, have already migrated from the ‘further right’ ECR to the more ‘center right’ EPP. That is not because mainstream conservatives in Europe are necessarily moving right. It is because they are not paying attention to the hijack of history by Eastern Europe’s far right, and its ongoing export to the West. It is a classic ‘under the radar’ sequence of events.

In the meantime, East European nationalists’ obsession with revision of history has continued apace. To downgrade the Holocaust and upgrade Soviet crimes, to deflect attention from local participation in Nazi genocide and to abuse the tragic history of Europe for current east-west politics, there has been a series of resolutions and projects continuing the spirit of the 2008 “Prague Declaration,” an Orwellian document that insists that Communist crimes “must inform all European minds to the same extent as the Nazi regimes’ crimes did.” If your mind is differently informed by Nazi and Soviet crimes, you may have no place in “Prague Declaration Europe.”

But the crafty and for Old Europe inscrutable schemes drifting westward have now brought “red-brown politics” (the movement to have all Europe and the planet declare Nazi and Soviet crimes “equal”) out of the ECR and right into the mainstream center-right European People’s Party (EPP), the organizers of today’s hearing in Brussels.

Precisely because much political expertise had gone into the repackaging of red-brown dogma as “mainstream,” the speakers from the podium were anything but extremist. In fact, the rabble-rousing rightist tone could only be heard from Baltic interventions during the debate intervals. 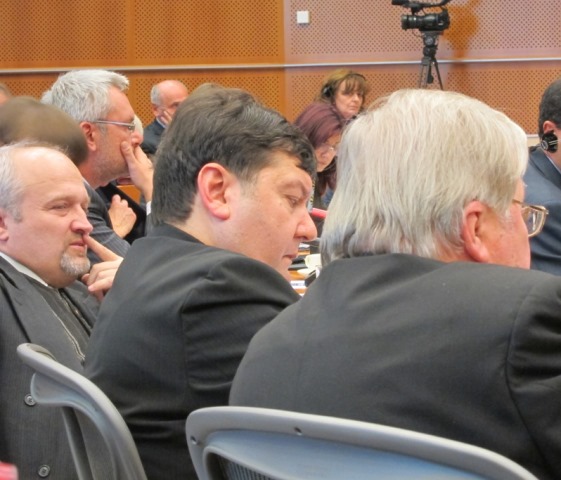 Left to right: Gintaras Songaila, Emanuelis Zingeris, Vytautas Landsbergis at the ‘Montero event’ at the European Parliament in Brussels (19 Oct 2011)

Lithuanian MEP Vytautas Landsbergis castigated Europe in harsh terms for failing to include under ‘genocide’ killings that were not on the basis of race, religion, ethnicity, etc. His protege, the right-wing MP Emanuelis Zingeris, the one Jew in Europe to have signed the Prague Declaration, took the opportunity to blast Austria once again over last summer’s Golovenko affair. They were cozily seated with the far-right pro-Nazi-march Lithuanian politician Ginataras Songaila. All were chummily united for this day’s purposes.

Another vituperative complainer from the floor was Estonian MEP Tunne Kelam, who had  complained bitterly back in January 2008, when the movement for “equal evaluation of the two large criminal regimes” was being set up in Tallinn, that the phrase “Never again” was somehow being monopolized by Holocaust survivors. Before January of that year was out, British MP John Mann, an internationally noted human rights champion, rose in the House of Commons to expose the entire ruse.

But here today in 2011, coming just a week after the establishment of the “Prague Platform of European Memory and Conscience,” whose grand finale was attended by  the prime ministers of the Czech Republic, Hungary and Poland, the many references to the Prague Declaration and Prague Platform as accepted European Truth made way for a new pragmatic phase of the red-equals-brown, or ‘Double Genocide’ movement, in which the controversial ideology underlying the Prague Declaration could be ignored, and discussions could focus on pragmatic steps: criminal prosecutions of communist offenders for “Genocide” (as opposed to for their crimes), criminal prosecutions of those who would in the future deny the (purportedly genocidal) nature of (all) Soviet crimes, and above all, mechanisms to lure Old Europe (the founding and long term members of the European Union) to sign on to the entire agenda of the “Prague Process.”

Many a speaker, however, made the point that to go further, the legitimate effort to expose the crimes and history of Communism need to be convincing also to Old Europe, and lamented that success in that direction has been singularly limited.  But not one seemed to understand that the malicious and far-right insertion of the notion of equivalence with Nazi genocide is what has stalled the movement out. It is high time for a genuine initiative to enable education, documentation and justice in respect of Communist crimes on the obvious merits of the issues.

A microcosm of where the red-brown movement can lead can be abstracted from the case of Lithuania whose state agencies (no reflection on its long suffering people!) have in the last few years instituted kangaroo prosecutions against Holocaust survivors who joined the resistance, criminalized the view that there was only one genocide (the Holocaust) in the country’s twentieth century history, and seen a court legalize public swastika displays.

But if there was any one central danger exemplified at the conference, it is the relative ease with which the well-oiled red-brown movement can entrap well-meaning westerners in the web. This time it was Professor Carlos Closa Montero of Madrid’s Center for Human and Social Sciences, author of the 2010 report that the European Commission used last year to turn down the Eastern rightists’ demands for further red-brown legislation. By inviting Professor Montero as an honored speaker, the misimpression was given that he necessarily agrees with the purposes of the movement (and the conference). 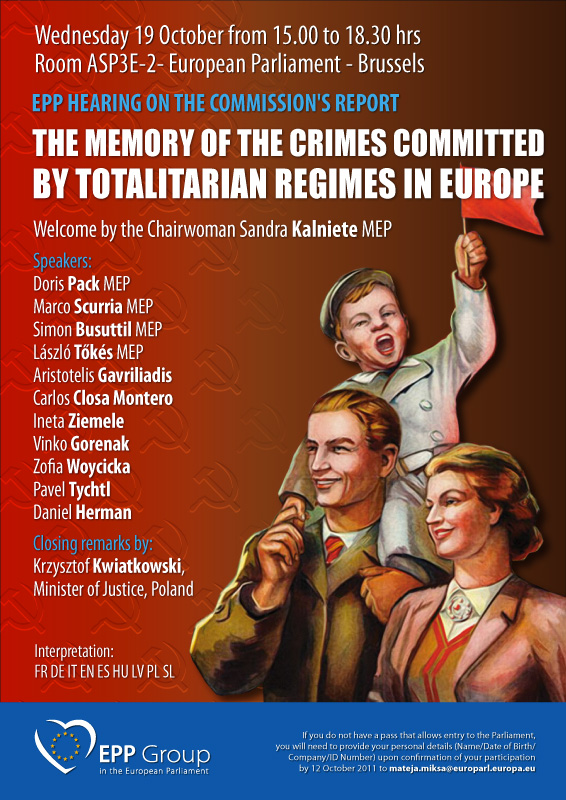 It’s all about ‘totalitarian regimes’ but the only image is from…. Soviet times.

DefendingHistory.com caught up with him during the drinks reception at the end of the event. Startled that a dissenter was even present, he quickly added his own doubts. He pointed to the conference poster, noting that it featured only a Soviet image, and recalled his visit to the Vilnius Genocide Museum’s distorted and distortionist exhibits.

Confronted with the idea that his presence was being abused by a sophisticated crowd of East European Holocaust obfuscationists, he replied that it was a  thought that merited further consideration.